The Shure SM58 is one of the most legendary microphones in audio. The tried and true $99 dynamic sounds great and can literally be run over by a truck and still work. They’re cheap, effective, and just don’t break.

Unsurprisingly, this age old design has had some competition, with different microphone companies bringing $99 handheld microphones to the market aiming to capture the rigid durability of the SM58 while improving the sound quality.

Sennheiser has brought out a microphone in this category. The e835 not only is built with the best of them but makes many improvements over the classic design.

Designed with live performance in mind (stage mic), the e835 can handle high SPLs (in excess of 150dB), has a uniform pickup pattern to capture the same sound around the basket of the microphone, and a new shock mount to reduce handling noise.

The Sennheiser e835 sports some specs on paper over the SM58, but the old favorite is still used in venues and recording studios around the world every single day. Does the Sennheiser really have anything up on the SM58? Or is the classic design truly timeless?

Main Difference Between the Sennheiser e835 vs Shure SM58

What are the main differences between the Sennheiser e835 and the Shure SM58?

Bottom Line Up Front: For most users, I recommend going with the Shure SM58 available here. It works better out of the box, requires less tweaking, and is generally a better value overall.

Still, the e835 is a nice mic option too, but continue reading to find out how I reached my conclusion…

The SM58 set a standard in the industry that a microphone built for live applications had to be able to withstand any possible circumstance that it could be thrown in. Let’s break down which mic wins out for durability:

The SM58 needs little to no proving to show how durable it is. There is a slew of tests online (some by Shure themselves) to show just how much this microphone can handle.  Whether it is beer spilled on it during a gig, or the microphone being tossed across the floor, the SM58 can handle it. Shure trusted this mic so much that they actually ran it over with a tour bus (it still worked, by the way).

Needless to say, the Shure SM58 is built to last a lifetime, and many will end up keeping theirs for that long. In terms of durability, it’s hard to beat a SM58. 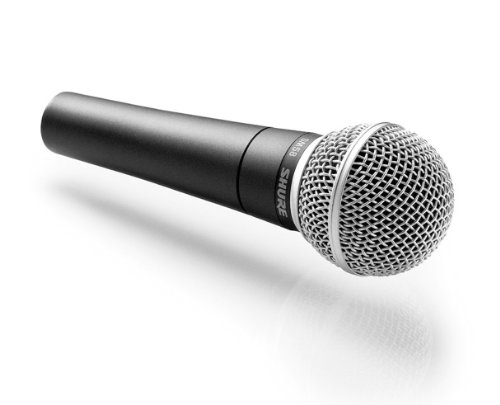 While the Sennheiser e835 doesn’t hold the legacy that the SM58 holds, it doesn’t mean that it is any less durable. Sennheiser has not performed the insane stunts that Shure has, but this microphone can live along the SM58 in terms of durability.

The Sennheiser mirrors the Shure with an all metal body and windscreen, and feels just as durable in the hands.

If you’re just casually using the microphone in studio, then the e835 will hold up just as well as the SM58, but if you’re planning on venturing further beyond that, than the SM58 still wins out. As such, the SM58 is an excellent stage microphone.

Regardless, both microphones will stand up for 99% of what you can throw at them and an attractive 10 year factory warranty on the Sennheiser gives a little bit of comfort if the microphone somehow does end up under the wheel of a tour bus. While technically the SM58 wins in this category, I’m going to call a draw since both microphones hold up so well.

One of the main reasons all-purpose $99 dynamic microphones are so attractive is because it is just that – all-purpose.  While mainly used on vocals in a live application, both microphones should be able to be thrown on any source and still get great sound quality. Let’s see which mic meets this challenge:

The SM58 is, again, iconic for sounding great on a variety of sources. While the there is a bump in the top end of the microphone (high frequency), the rest of the frequency response is fairly flat, with a steep roll-off beginning at about 100 Hz.

For the flat response, the SM58 can be used on just about anything and still get a fairly good sound out of it. However, I would shy away from using it on anything that needs information below 100Hz because the SM58 doesn’t seem to handle this region very well. While the marketing material suggests that the frequency response goes all the way down to 50Hz, the true story is that the microphone can barely keep up at 75-80Hz.

The e835 tells a similar story to the SM58. There is a presence boost, a flat frequency in the midrange and a roll-off in the lows. However, the e835 takes this classic response and pushes it further. First off, the presence boost is slightly more exaggerated and extends further than the SM58. This is very valuable on sources like the human voice, but can be troublesome on instruments like hi-gain guitars.

However, the most interesting change in the e835 is the extended low-end. While you won’t hear much below 50Hz on either of the microphones, the e835 has a much slower roll-off, maintaining a lot of those low-end frequencies. For this, it can be used on sources like a bassy voice, a bass guitar amp, or even a kick drum and still fair decently well. 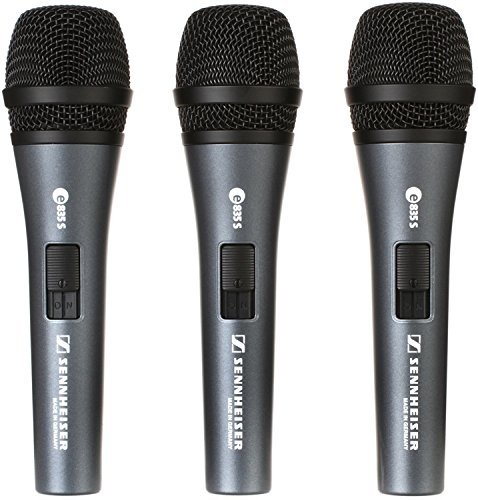 Once again, both microphones can perform exceptionally well under any circumstance given the price point. Each microphone has its strong suits for different sources and if you’re fortunate enough to own both, you can experiment and find what you like.

While this could easily be called a draw again, I’m going to give the win to the Sennheiser e835. For my money, an extended low-end response is invaluable in an all-purpose microphone and I think the presence hurtle is much more easy to work around than trying to get back low-end that isn’t there on the SM58.

All of the specs and all of the testing compared don’t matter if the microphone doesn’t sound any good. At the end of the day, these microphones have to be durable and versatile, but they have to sound good to begin with. Let’s see which microphone sounds better:

The SM58 is not the best sounding microphone out there, by any stretch of the imagination. While it does have a presence bump and a steep roll-off, the microphone often comes off a bit flat sounding. That isn’t to say that the microphone sounds muffled, because it certainly does not, but it just sounds like a clean slate with crisp clarity.

For this reason, the SM58 can sound just about any way you want it to sound. The reason that the SM58 is so popular outside of durability and versatility is because it takes EQ so well. The microphone can be shaped however you see fit and often comes out with a good sound.

Out of the box, you may be underwhelmed with the SM58, but all the information is there for you to turn it into the handheld microphone you want to hear.

Out of the box, the Sennheiser e835 is much more pleasing than the SM58. Attributed to the presence boost, the microphone sounds more open and airy, almost like a stock EQ put on a SM58 normally. On the other side, the lows sound fuller and more defined, making the microphone’s all-around sound more pleasing when first set up.

However, this means that the microphone has much less room for EQ before meddling into poor territory. The e835 cannot be pushed with EQ like the SM58 can, and resembles more of a finished product and less of a canvas. For certain applications, this is incredibly useful and the e835 will win over an SM58 every time. Since the microphone cannot be shaped like the SM58 though, it can often come off a tad too harsh on some sources since the presence boost is so much higher.

In my experience, if the highs are boosted anymore on an e835 in a live setting, then the microphone starts feeding back like crazy, an issue which needs to be avoided at all costs.

It’s very difficult to call a winner in a category in which the sound is so dependent on the source.  The e835 does sound much pleasing, but the SM58 sounds better if tweaked properly.

For the EQ abilities with the SM58 that are not as wide ranging as those on the e835, I’ll have to give the win to the SM58 since it can be molded much more to sound better on any source. Bear in mind that if you need the microphone for one purpose, and one purpose alone, then the e835 may be the better option.

The $99 handheld dynamic market is vast beyond all measure with offers not only from Shure and Sennheiser, but also from Blue, Rode, AKG, Audix, and many, many more. Out of every single one of them, the Shure SM58 still holds an unbeatable legacy of durability and sound quality only rivaled by a few microphones (including the e835).

At the end of the day, as with many other things, the choice comes down to preference. The Shure SM58 almost never sounds bad no matter what it is thrown on, but a little extra quality can be squeezed out of the Sennheiser e835 with the right source.

Bottom Line: At the end of the day, I lean more towards the Shure SM58 available here, at least for the average user.

Juan is a self-professed sound-nerd and the webmaster / lead author & tester for AllSoundLab. You might literally walk into him on the street because he's tuned out to the world and tuned into his beats...

I’ll take the Sennheiser E 835 over the Shure SM 58 any day of the week. There’s really no comparison.