Harman Kardon is synonymous with incredibly high-quality speakers. While maybe a bit overpriced at times, every one of their products produces fantastic audio quality and has the looks to match. Their Onyx Studio Bluetooth enabled speaker is no exception, producing a much bigger sound than the size would suggest.

Unsurprisingly, the popularity of the compact speaker prompted Harmon Kardon to create a refresh – the, very appropriately named, Onyx Studio 2. However, does this new version add much more than an updated aesthetic? Or is it just marketing at play?

Bottom Line Up Front: I actually think the upgrades for multi-device support and phone integration on the Onyx 2 available here are well worth it. Of course, continue reading for the full comparison…

Sometimes, classics are just better. Despite not holding as smooth of an aesthetic as newer models, the original Onyx studio proves to be an incredible Bluetooth speaker, despite its age.

The speaker that started the whole line is still beautifully designed, which shouldn’t come as much of a surprise. However, in the context of new iterations, this version looks more like a prototype than a status symbol.

The speaker still features the circular design, that leans back on two silver feet. On the back, there’s a convenient carrying handle for mobility and a woofer with a brushed silver dome and Harmon Kardon branding. 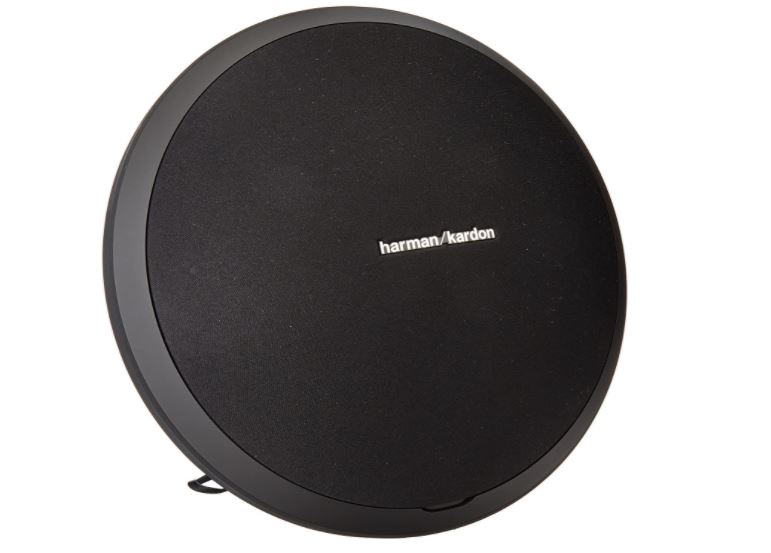 The top features a familiar set of controls, including soft-touch controls for Bluetooth, power, and volume. However, the main part of the speaker that makes it look like a prototype is in the front. The grille looks about the same as newer models, but a thick soft rubber ring surrounds it, killing the sleek look of the speaker.

That’s really up to the eye of the beholder though and is only a concern when the other speakers are taken into consideration. Overall, the design of the Onyx Studio is gorgeous, just not timeless.

Feature-wise, the Onyx Studio is a little barren. Being the first model of the line, features seem omitted in favor of releasing new versions of the speaker in the future.

In fact, there’s nothing outside of actually producing sound here. The Bluetooth 3.0 connectivity means newer devices are compatible, with improved range, but other than these, there’s not much else.

In this light, the Onyx Studio is a bit of a one-trick pony, but that trick is certainly a good one. The speaker doesn’t do much outside of producing sound, but the sound it produces is pure, rich, and deep.

If there’s something that is timeless about this speaker, it’s in the sound. Harman Kardon proves again that their products, even being multiple generations old, perform on par with modern speakers.

This is largely due to rear-firing bass that sounds absolutely massive considering the size. The Onyx Studio fires well above its price point in terms of its sound, providing a fruitful experience that is matched by few other speakers at this price point.

It should be noted that, due to the design, the sound is pretty directional. So, walking around the speaker, you’ll notice a significant degradation in the top end. 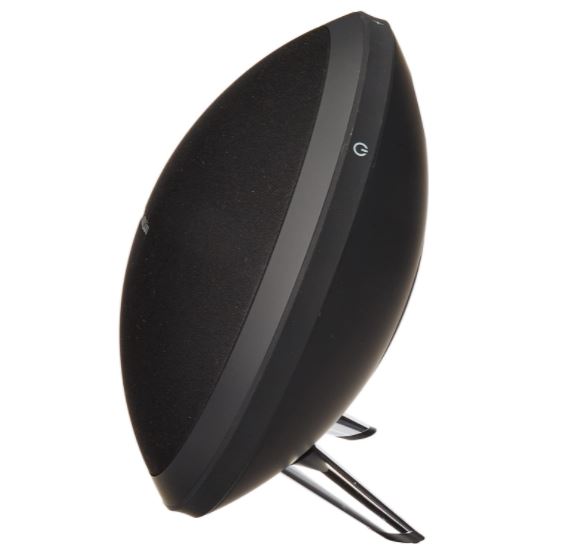 However, it doesn’t end there. Hitting the speaker at a diagonal can cause a drop in perceived low-end. Still, this shouldn’t be much of a surprise considering the size and design of the Onyx Studio.

Overall, the Onyx Studio gives it where it counts. The performance of this Bluetooth speaker is top-notch and, when that’s considered alone, it’s a definite winner.

However, the overall look and feature set is dated. Almost no other features are present, and the design makes the speaker look like a prototype of new iterations instead of a modern speaker. Still, there’s little to complain about, and it’s difficult to improve what Harman Kardon managed with the Onyx Studio.

Then comes the Onyx Studio 2. When looking at the two speakers on paper, they are literally the exact same in terms of specs. However, a few new design features make this speaker feel like, at the least, a slight upgrade over the original model.

One of the immediate differences between the two speakers is in terms of aesthetics. The Onyx Studio 2 is a much more compelling option here, looking much more modern and refined than its predecessor.

The circular design feels familiar, but the overall color scheme has been slightly shifting. The legs are now finished in a shiny copper, with black feet at the bottom, and the woofer features the same brushed finish as the Onyx Studio, but now in the same copper color. 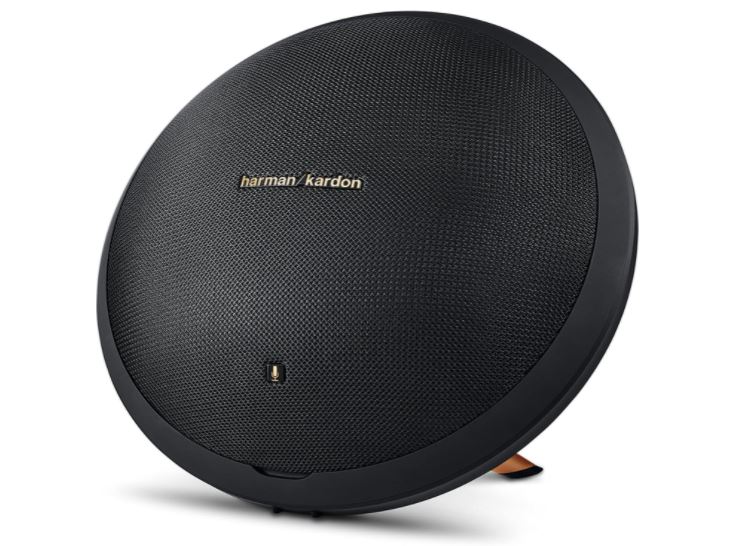 As opposed to the soft rubber finish on the back like on the Onyx Studio, the Studio 2 features a Tolex type finish that’s still soft to the touch, but much more textured.

The top features some similar soft-touch controls for volume, Bluetooth, and power, but are now slightly indented so they can be found without looking. The addition of a phone button expands the functionality of the Onyx Studio 2, but we’ll talk more about that soon.

All things considered, I like the look of the Onyx Studio 2 much more than the original model. The upgrade in color scheme and practical updates to the top buttons make this speaker feel much more modern.

Another improvement over the original model is in the feature set. As opposed to the barebones design of the Onyx Studio, this second iteration adds multiple device support as well as deeper phone integration.

Starting at the top, the speaker now allows two devices to be paired to it, meaning you can share music playing capabilities with someone else. This is a nice, although not necessary, a feature that works so long as you don’t continually try to stream new tracks to the speaker. It doesn’t handle that very well.

However, the real winner here is in the phone integration. The Onyx Studio 2 now has a microphone built-in at the front (branded nicely in the same shiny copper finish) that uses Harman VoiceLogic echo and noise cancellation to make calls clear on both ends.

This integration makes the Onyx Studio 2 much more functional than the previous model. While it may not seem super important, the ability to have music pause, answer a call, and resume immediately was super convenient, especially considering I often listen to music alone and don’t want to fuss with my phone.

This is the area where the Onyx Studio 2 seems much less impressive. A lack of improvement in the practical design here makes this “upgrade” feel more like a reskin than anything else.

I wish I could say more about the speaker, but if you want to read how it performs, just look above. I was hard-pressed to find a discernible difference in the quality of the sound comparing the two speakers.

In fact, I would go as far as to say that they are the exact same in terms of pure performance.

Still, that’s not a bad thing. The speaker still sounds full and rich, with a plentiful low-end and crisp top-end. The same directional issues exist with little to no improvement over the previous model.

There are differences between these two speakers. The second iteration adds a lot to the looks and practical functionality of the speaker with integration of a (pretty decent) microphone.

However, the performance was disappointing considering there was little to no improvement over the previous model. To avoid the placebo effect, I would just assume that the difference is non-existent.

Comparing these two speakers, it, unfortunately, comes down to personal preference. For purists who are just looking for performance, the Onyx Studio 1 will suffice, and will probably save you a few bucks if you shop used. However, the upgrade in design and usability, while making no impact on the audio, prove to make the Onyx Studio 2 a significant upgrade over the original model.

For my money, the additions to the second iteration are enough to justify a potentially slightly higher cost. Using the integrated microphone is a joy and the convenience of one-touch operation for answer phone calls is perfect for lounging by the pool or sitting with your phone on a charger.

Hi, I have a HK Onyx studio 4 and the older version that doesn’t have the AUX jack nor the button to link two or more speakers. My question is can I link these two models and if so how do I go about doing so. Thank you for your prompt response.

Isn't 1 with the bass "flanges/reflectors" inside and the 2 without ? I saw somewhere people felt the bass on 1 distorted the highs, which is why they redesigned it without these. Listened to the 1 and LOVED it, but sold out fast. When I checked the 2 in store it didn't sound as good IMO ... Help me out here if you can, as I want to buy one used online at this point. Thanks in Advance, dAn