It’s hard to go and exercise without music. Surely you’ve tried and know the annoyance of having a cord flying around. Bluetooth earbuds have tried to solve this between your phone and the earbuds, but a cord between the drivers would still fly around.

So, Plantronics tried its hand at creating a solution. The Backbeat Fits are a pair of Bluetooth headphones with a semi-stiff connection that wraps around the back of your head so they don’t fly around. They’re like a cross between earbuds and dedicated headphones.

Despite some issues, the earbuds sound and look great. They have enough functionality to satisfy those on the go. If you want a pair of earbuds to exercise in, these are a good option. 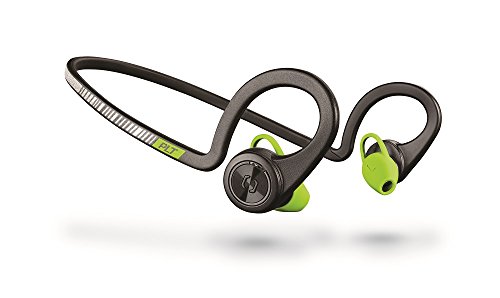 Plantronics BackBeat FIT Wireless Bluetooth Headphones Check Price
We earn a commission if you click this link and make a purchase at no additional cost to you.

Like many others, these earbuds come in a bunch of different colors. However, the look isn’t as flashy as some other options. The colors are more understated, accenting the earbuds instead of hijacking them. Regardless of your preferences, you’re sure to find a pair that fits you.

I like the sports grey option the most. The light grey wraps around the headphones on the outside with black on the inside. Of course, everything I buy has neutral colors, so take that with a grain of salt. 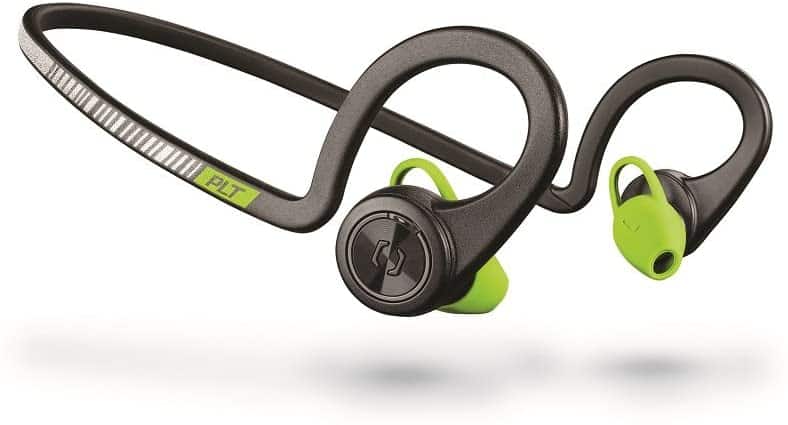 Of course, the main point of the design is the headband. It’s semi-stiff, meaning it’s still flexible, but should stay in place if you’re not messing with it. The band is meant to wrap around the head, but not hug it. It sits off the back of the head about an inch, making it kind of a “one size fits all”. I couldn’t find anyone that said that they didn’t fit so all should be well.

Around that headband is some plantronics branding. That means the headphones can stick out a bit. They are meant for sporty people, and the design follows that. There are no flat color options, so they may be a bit tacky for everyday use.

The finish is reflective as well, meaning you’re covered for a nighttime jog or walk.

Further keeping with workout junkies in mind, the earbuds have controls on both ears. One is an all-around control. This single button is used to answer calls and skip songs. The other is a play/pause button.

There’s an additional function for double and triple touching the buttons, but it becomes confusing quickly. Many Bluetooth earbuds have more elegant solutions. While I understand what Plantronics is going for, it becomes hard to navigate quickly.

However, not all is well. While the fit is fine for most, it becomes problematic if you’re wearing a hat or sunglasses. The rigidity is nice, but there are some issues in terms of ergonomics.

These earbuds are about as feature-rich as they come. It’s clear Plantronics really tried to push them over the edge, making them in an all-in-one package in the feature department. They’re water and sweat-proof, come with some extra goodies and have enough battery life to last you through the day.

Let’s start with the key feature, waterproofing. These earbuds have an IPX7 rating, meaning they can be fully submerged in water without breaking. IPX7 means that they can be submerged for up to 30 minutes. Take them out in the rain, sweat all of them, nothing is really of limits short of swimming with them. 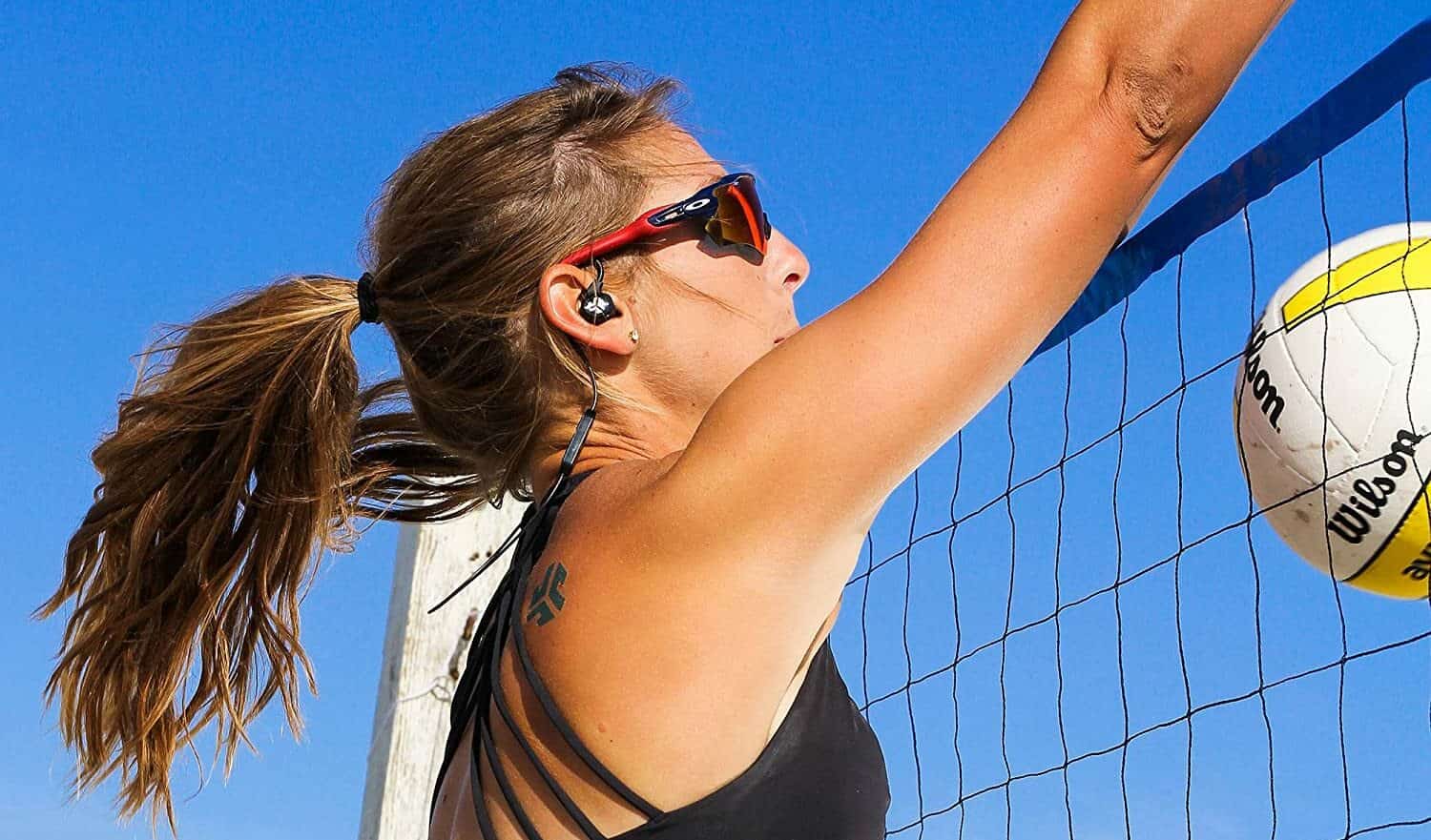 In addition, there’s a nano-coating to protect against sweat. There’s a lot of garbage in sweat and this extra coating protects against the effects of moisture and effects of all the other stuff in sweat.

The earbuds are rated to last up to eight hours before they need to be recharged. That’s more than enough for most people, but if they happen to die, Plantronics has you covered. The quick charge technology built-in will give you an additional hour after a 15-minute charge.

However, charge time slows down to regular rates after that. It’s not compounding. For example, there’s no guarantee that 30 minutes of charge will give you two hours of listening and so on.

Additionally, Plantronics has a companion app to go along with the earbuds. However, the app doesn’t do much. All it can do is update the firmware of the earbuds and switch voice alert languages.

While the earbuds are only rated for about 30ft of line-of-sight distance, they worked far beyond that. The range is closer to 50 feet away, without dropping connection once. That is line-of-sight, so don’t expect them to hold well through a bunch of walls and such.

Now, there are some issues. The functionality of the headphones poses some issues to the sound quality. The overall response isn’t bad, but not what you’d expect from a pair of earbuds over $100.

Let’s start with the colperut. The ear tip design is open much like Apple earbuds. Plantronics did this so you can hear some surrounding sound in use. Again, perfect for those working out.

However, the ear tips cause problems. Because of their design, the bass becomes weak and the treble tinny. Yes, they aware you of your surroundings, but at a severe compromise to the sound. 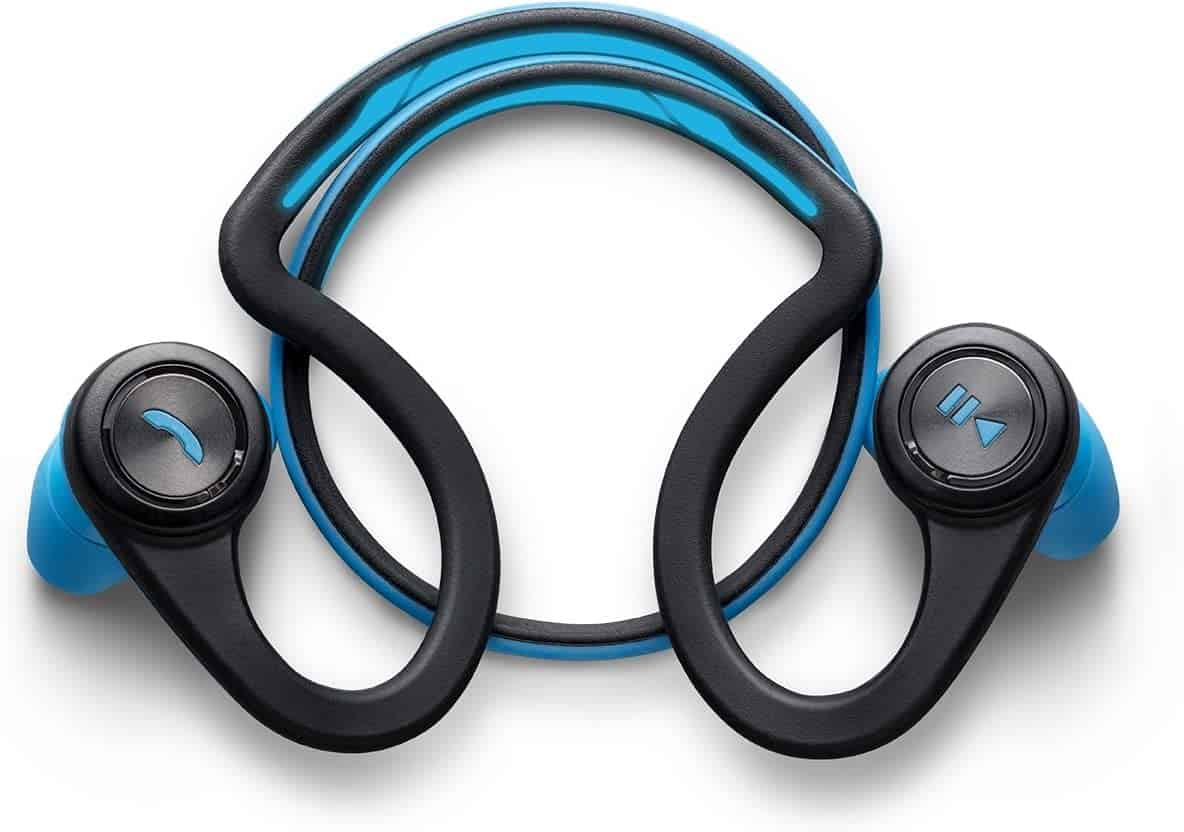 What’s really unfortunate about this is that it’s not the earbud’s fault. The actual drivers sound great. The problem is just the ear tips. Because of their design, a lot of the energy is lost coming out of the drivers, causing issues in the high and low areas of the frequency spectrum.

Consequently, the volume suffers as well. Since that energy is lost, some of the volumes are as well. It’s not well below others on the market, but it’s not ideal for those who max out the volume of their music. 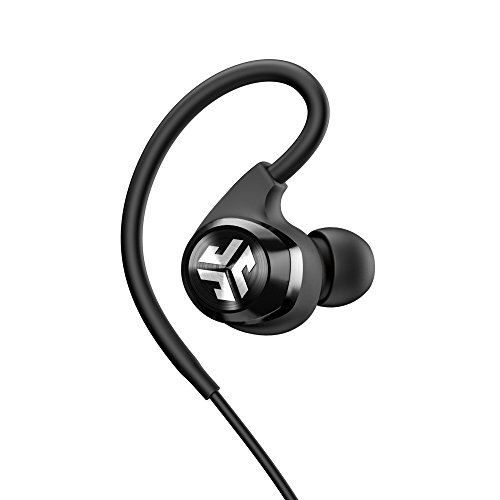 JLab Audio Epic2 Bluetooth 4.0 Wireless Sport Earbuds
$44.95
Check Price
We earn a commission if you click this link and make a purchase at no additional cost to you.

The JLab Epic2s solve just about every issue with the Plantronics earbuds. First off, the earbuds are sealed, meaning that glorious bass isn’t lost. Highs are more recessed as well, a good thing for long listening sessions.

And you can listen to them for a long time. The earbuds are rated for 12 hours of playtime before they need to be recharged. Ideally, they suck little to no power, meaning they’ll probably last you quite a few days before a recharge.

They also have a microphone built-in for taking calls. That was something missing from the Plantronics that’s nice to see here. 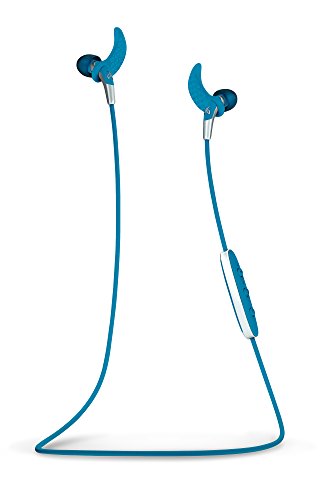 Jaybird Freedom F5 In-Ear Wireless Sports Headphones Check Price
We earn a commission if you click this link and make a purchase at no additional cost to you.

Jaybird is one of my favorite companies out there, and these earbuds showcase why that’s the case. The sound just feels right. Everything fits in its space, with slightly recessed mids and punchy bass.

However, that’s not for everyone. Thankfully, Jaybird has you covered. The app for the earbuds has a five-band equalizer with slope options. That’ll get you a lot further than the EQ built-in on your phone.

The only issue is the fit. The earbuds have a tendency to fall out of their ears pretty easily. They’re small and don’t have a lot of rigidity to them. If you work out a lot, that may be something to consider. 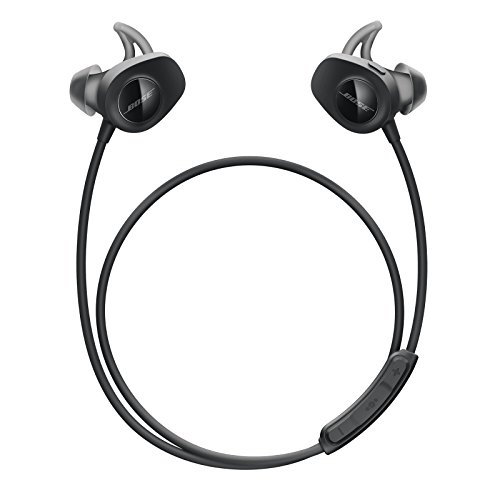 Bose SoundSport, Wireless Earbuds
$129.00
Check Price
We earn a commission if you click this link and make a purchase at no additional cost to you.

Bose solves just about every issue posed with every other pair talked about here. The sound is great, with excellent isolation and plenty of range. They’re sweat and weather-resistant as well, meaning you can take them on the go.

They’re super secure with a unique ear tip design. The wings hold them in your ear and the tips rest inside of your ear comfortably.

However, there’s one problem. The earbuds are only rated for six hours of playtime before they need a recharge. If you have a really long flight, make sure to pack a backup pair.

Plantronics BackBeat FIT Wireless Bluetooth Headphones Check Price
We earn a commission if you click this link and make a purchase at no additional cost to you.

The Plantronics Backbeat Fits are a pair of earbuds that exceed well above other earbuds in some areas and fall sorely short in others. The fit of them is great, probably among the best out there. Combine with a rigid design and these earbuds can stand up to a serious beating.

However, the issue is the sound. Because of the open-ear design, the audio suffers. Bass is lost in translation and the high end becomes overbearing quickly.

For me, I wouldn’t get the Fits. I’m not that active, and sound quality is number one in my book. However, that doesn’t mean there isn’t value here for some. The build, look, and fit are exceptional and may justify the cost for some.