Finding a smart speaker to sync up your home is becoming more and more complicated. As new devices have released that push the envelope of what these devices can do, the market becomes denser.

However, two speakers that currently sit above the bunch are the Sonos One and Apple Homepod. While the Apple iteration sits at almost double the price, it brings a fully realized version of a smart speaker, while the Sonos pulls far ahead in sound. Read on to see which gets our pick overall, though.

The Sonos One takes the popular Amazon Alexa AI and puts it into a higher quality shell. Sonos has really done great work in previous years, with compact speakers that manage great sound without costing too much. 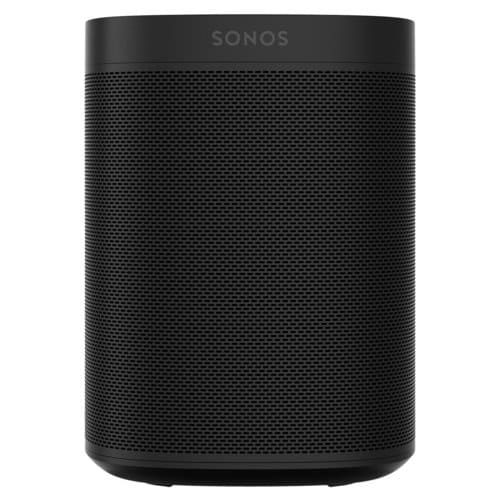 Check Price Buy at Amazon.com
We earn a commission if you click this link and make a purchase at no additional cost to you.

The One is basically just a rectangle, with slightly curved edges, and a grille surrounding the body. Sonos uses this minimal aesthetic across nearly all of their devices, and the One carries the torch as well. Despite that, there’s plenty to like about the look.

A metal grille surrounds the body, providing most of the protection. Outside of that, the One features a soft rubber finish that can take quite an impact if dropped. While it isn’t built for this purpose, you can probably get a few hits in before anything busts.

Dropping it shouldn’t be an issue, though. Sonos includes threads for mounting on the bottom, and there are a variety of different wall mounts available. Some sound settles up in the corners, but it keeps the One out of the way.

On top, you’ll find the touch controls. There no buttons, just markers. You don’t need to follow them, though. Simply tapping the top will play or pause your music, and swiping left or right will skip tracks.

Essentially, the One is just an upgraded Amazon Alexa. The same voice control system is in place, but you get a speaker worthy of the Sonos name. However, without any first-party application, this configuration presents downsides.

There is absolutely no Bluetooth, much like the Amazon Alexa. It looks and functions like a Bluetooth speaker, so it seems a bit counterintuitive, yes, but the only way you can connect to the speaker is over wifi.

That is the only way, not just the only wireless way. There is no 3.5mm jack or any other way to connect your device to the speaker. This presents quite a big problem, especially if you live in an area prone to frequent internet outages. A 3.5mm jack is simple enough and should be a minimum on a device at this price.

Even so, you get the fantastic Alexa AI in the speaker. You can interact with it, get notifications from your phone, or even ask it to tell you a joke. The AI is fantastic and while you miss out on a few features from the full device, the upgraded speaker is well worth it.

Sonos includes an app for the device as well where you can control the current playback. While it’s intended as a one-stop-shop for the speaker, it doesn’t function very well. In almost every case, I preferred to use the Spotify or Apple Music app over the Sonos one.

The One really shines in its sound quality. Sonos has an attention to detail in audio that truly shines through with this device. For the footprint, it’s hard to get a better sound. Alexa gets a true upgrade with the One. 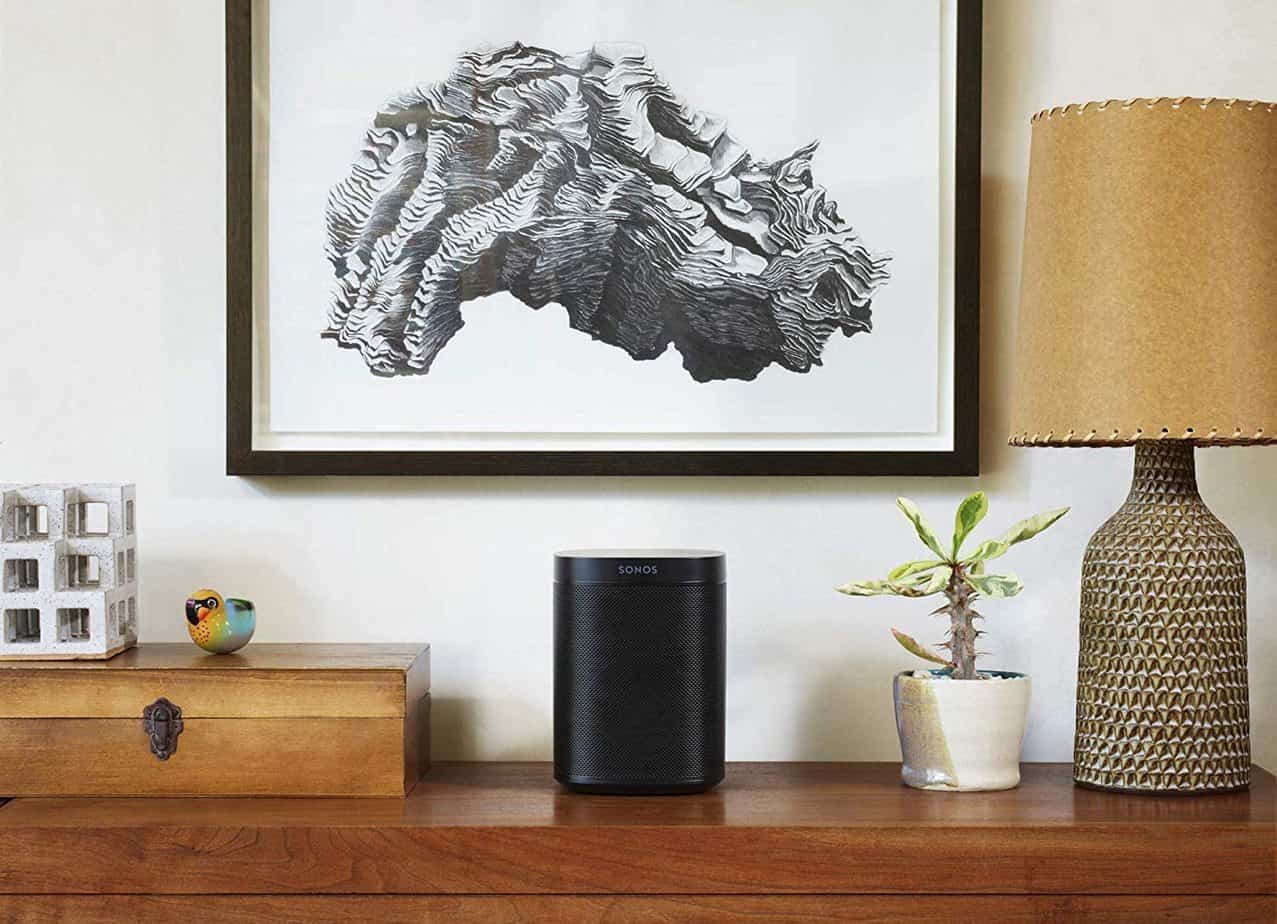 Like the Alexa unit itself, the bass is surprisingly good for the size. Passive radiators create a consistent and room-filling low end that punches way about what the size would suggest. While it certainly won’t the place of a sub or larger speaker, it’s a fine substitute for convenience’s sake.

The sound itself is a stereo signal (meaning two channels inside the actual unit) but has more of a perception of a mono source. Since it is, in fact, a singular unit, a truly wide stereo field isn’t achieved when one speaker is on its own.

You can, however, pair two or more of these speakers together for multi-room configurations or stereo sound. Unfortunately, you can only pair with another One, though. Other Sonos devices, such as the Sonos:1 (don’t get too confused) and the PlayBase aren’t supposed.

And, they never will be. Sonos intends for this unit to stand alone. While I appreciate the attention as far as ease of use goes, cutting it off from connecting to the rest of the ecosystem seems a bit far. As Sonos is focused on home theater setups mostly, allowing you to pair a One with your existing theater setup would be nice.

The Sonos One is easy to use and attractive but loses out in terms of features. While you will get the Alexa AI and excellent Sonos sound, the One is a closed system. It isn’t always bad, but here, it detracts significantly from the experience.

Check Price Buy at Amazon.com
We earn a commission if you click this link and make a purchase at no additional cost to you.

Apple’s take on the wireless speaker system bumps up the price and replaces Alexa with Siri. That should come as a little surprise, though. What is surprising is how much Apple manages to pack into the Homepod.

The build is pretty much the same, except there is no rubberized finish surrounding the speaker. Instead, a metal grille covers the majority of the cylindrical body, with a glossy black finish at the top. It’s a plain design, but one that truly carries the Apple feel.

You can choose either the black or white version of the speaker. There are no accents or anything like that. The entire speaker is covered in the color of your choice. There are some other things going on with the look, though.

Indicating lights on top of the speaker respond to whatever you’re inputting. Instead of just a plain set of LEDs on basically every other smart speaker, the lights blend into the top and radiate out naturally. Small, sure, but it’s one of the things that make Apple products special. The blending of the lights into the unit makes it feel that much more worth it and, while it doesn’t affect performance in any way, it sure feels worth it.

Now that the Apple magic is out of the way, though, it’s time to get down to what actually makes this speaker tick. It’s an all-in-one hub, defined as a centerpiece for your life. While the features are stripped back to the One, the Homepod comes fully stocked.

The main feature is listening to music since, after all, it is a speaker. The Homepod does quite a lot with this. You can tell the Homepod which songs you enjoy and which you don’t and it will remember, automatically adding it to playlists and creating its own based on similar songs.

You can control much, much more than music, though. The Homepod supports multiple different devices, from lights to thermostats. You set different scenes up and simply tell the Homepod which scene you want and it’ll automatically adjust lights, temperature, cameras, or any other device you have configured.

While initially, I thought this would be a completely closed system (as most Apple products are) the Homepod actually supports quite a bit. Most smart home devices can be connected to the Home app, and the Pod controls all of that, either with your touch or with your voice.

Features are great and are the true selling point of the Homepod. The sound, however, isn’t the star of the show. While Apple has some interesting kit inside, the speaker falls below the Sonos One, despite being near twice the price.

A woofer at the top of the speaker projects bass out the top, as opposed to using a passive radiator. It creates a much more natural bass, but less of it. A seven tweeter array at the bottom deals with the top-end, creating a nice sense of space, but without as much clarity as to the One.

To tune the sound better for each room, the speaker automatically adjusts based on its placement. It sends out a signal and then, using the six different microphones, senses when it returns. As it does, it estimates the distance from walls and uses the tweeters at different powers to create the most natural sound possible.

While the overall sound of the speaker isn’t as good as the One, it sounded the same no matter where it was placed in the room. That’s a huge testament to Apple’s tech and, while it’s too expensive, the speaker does sound quite good. The Homepod is overpriced, but that shouldn’t be surprising on an Apple product. Even so, it has the magic touch that makes the speaker feel as cool as it looks, with extra features to truly make it the centerpiece of a home.

The Homepod and Sonos One are both excellent devices, but both offer different perspectives. The One focuses on the sound, using the excellent Sonos name, but striping back on the features of Alexa. Alternatively, the Homepod is a much more inclusive system that, while at a higher price point, sacrificing slightly the audio quality.

What smart speaker are you going with? Let us know in the comments below and, as always, thanks for reading.

You say Sonos sounds better but ‘falls behind’ in smart features and yet fail to mention that Siri on homepod is so limited it cannot even set up two reminders and the entire speaker only supports one service vs 46 on Sonos, and cannot even be setup without the owner having an iphone

Im sorry but the ‘all apple or nothing’ philosophy is unacceptable when it comes to audio system. Without an apple device homepod becomes a paperweight - which in my world is unacceptable

Not to mention that Sonos can be expanded into a full home system with sub and soundbars and Homepod doesnt even allow for stereo pairing yet and curiously cannot act as a soundbar even if you have an apple tv (?!). And no, manually airplaying does not count

How exactly does that make HomePod better in any way ?