Let’s face it, headphones used to be just the bit that transported music from our player to our ears and weren’t too clever about how they did it. Originally only available as over-the-head type headphones, they didn’t fit too well and let you share at least some of your music with those around you, whether they wanted it or not.

The rise of personal stereos forced manufacturers to look for new solutions to this problem of noise pollution so that you might listen to your favorite tunes without annoying people in your locale too much, and so came the rise of the so-called earphones.

These started off as hard plastic nodules that gave some semblance of fitting into your external auditory canal and plying music directly onto your tympanic membrane, or at least that was the intention, but being mass-produced in the way that ears aren’t, the fitting was a little haphazard, leading to audio leakage – the same problem befalling the previous over-head design.

They also didn’t cater too much for comfort, being made out of hard plastic so forcing them into your aural orifice caused great pain.

Both of these audio options appeared around the same time as the national desire to get fit kicked in after decades of sloth, and the gym was full of people trying to rearrange their overhead devices as they jogged them out of position, or attempting to push the hard plastic nodules into resisting ear canals.

Speaker quality was generally great either so quiet apart from chronic pain associated with poorly fitting earbuds, the sound was also tinny and the sweat just made it all worse with foam headphone covers getting soaked and hard plastic ‘buds.’ Becoming slippery

Let’s get one thing straight; precision, comfortable headphones that are going to stay put during vigorous exercise are not going to be cheap.  Sure, the sweaty fella on the running mill next you may say that his $10 earbuds are just as good as the more expensive equipment that you are sporting, but rest assured that he is just deluding himself. 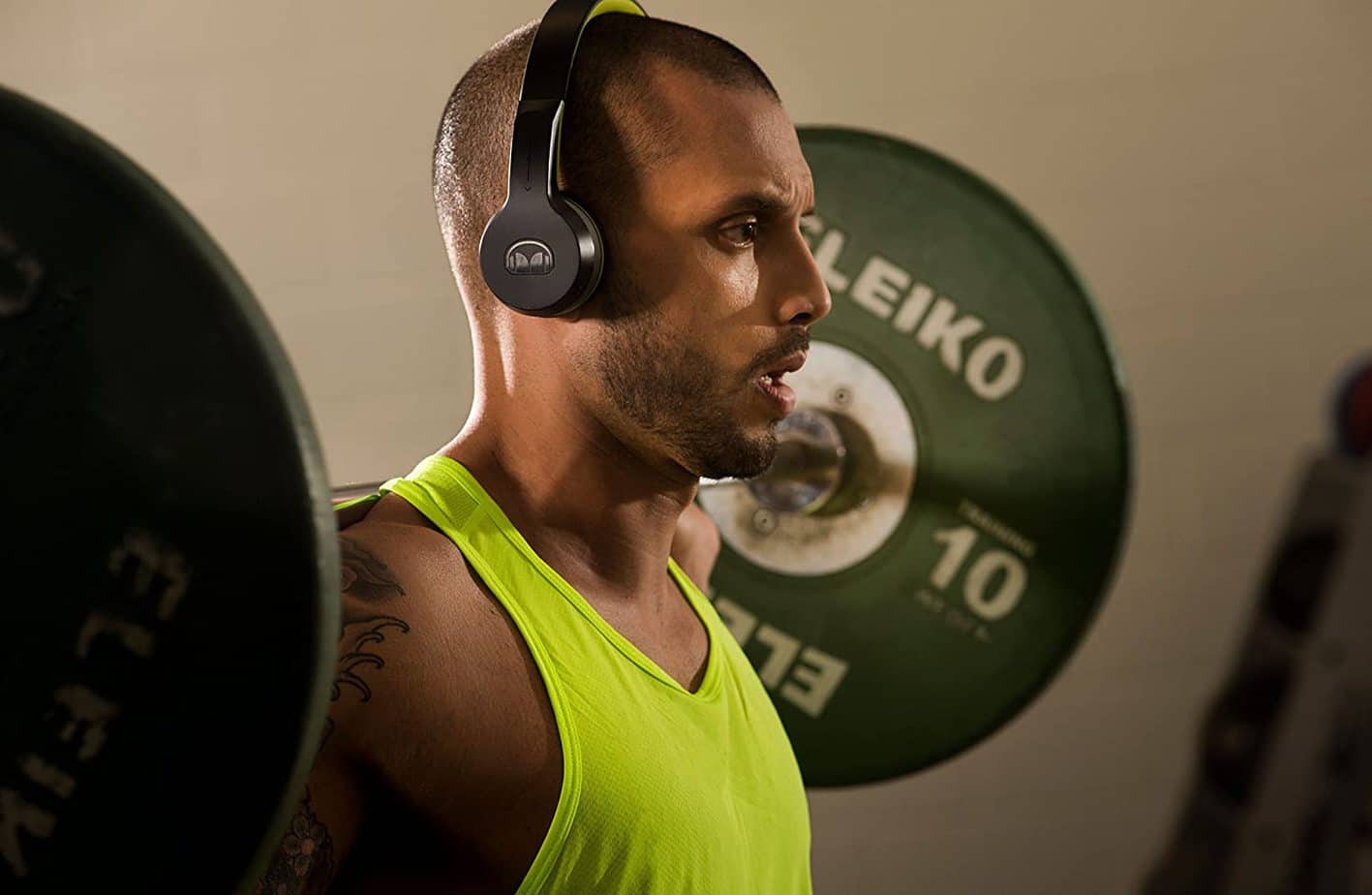 When it comes to earphones, quality is not going to come cheap but the upside is that you are going to get something that is comfortable, gives a great performance, and will stay in place while you jiggle.  The other upside is that you are unlikely to hear the point of the man next to you as you’ll just get mellow riffs and deep beats from your headgear with no leakage.

There are now several high-quality brands out there that cover a good range of price and performance and we’ve tested a broad range of them.

In a big step up from the wired version of the Powerbeats, this is something that you can be assured will give you great performance and maximum wearability, regardless of how intense your sports gets, and it even has a Basketball star LeBron James credited as the co-designer. 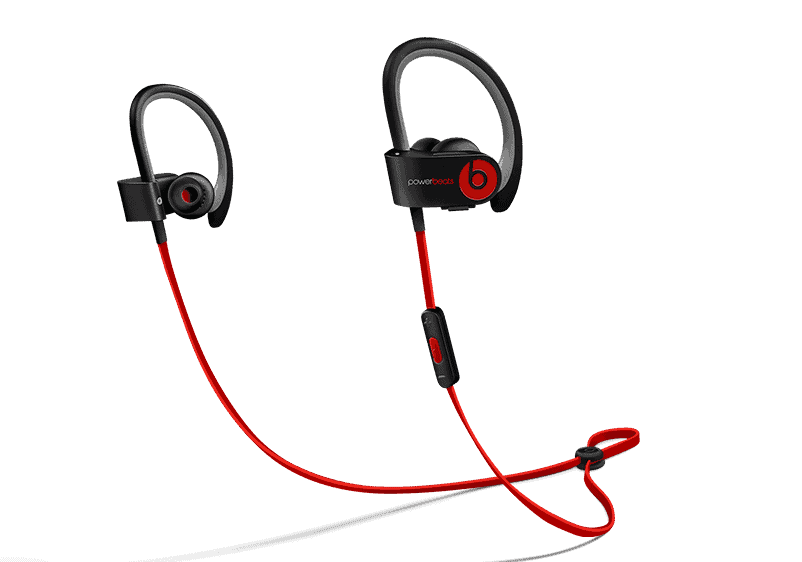 Okay, so he probably didn’t get down there with the CAD software, or even suggest the vivid color combinations, but it is likely that he did, at least put them through their paces on the basketball court, so we shouldn’t be too withering of his involvement.  LeBron was also a major figure in the launching of the wired versions so is well versed in all things Powerbeats.

The business end is fundamentally the same as the wired powerboats, sporting the same ear hooks as before, but they are subtly different from there on by simply being two earphones on a piece of cable with the Bluetooth receiver between them.

The ear hooks have a little give in them so that you can bend them to fit your particular ear shape, and they come with a series of earbuds so you can tailor them to your individual style, making them a tight fit with a little room to hear ambient sounds, like approaching cars and stuff.

The Powerbeats 2 have plenty of functionality, doubling as a Bluetooth headset for your phone, but they are pretty expensive at around $200. 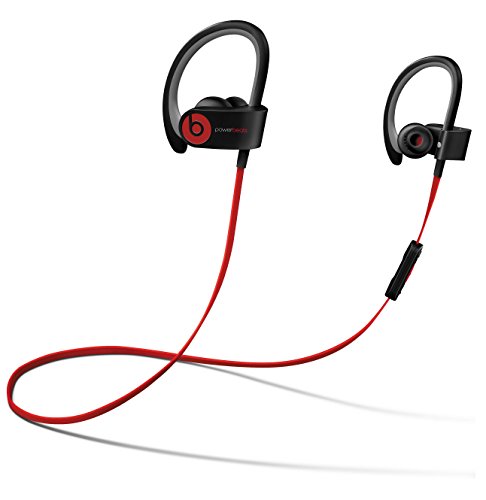 Beats by Dr dre Powerbeats2 In-Ear Headphones Check Price
We earn a commission if you click this link and make a purchase at no additional cost to you.

The new Bose earbuds are designed to complement the current range of Bose earphones – the IE2, SIE2i, and MIE2i range – rather than replace them so the Bose family of earphones grows rather than changes.

If you are familiar with the Bose earbud range then you will know that they aren’t designed to be jammed in your ear, but rather are a little loose fitting and stay in place curtesy of the well-designed winglets that always seem to locate in the right place on your ear. 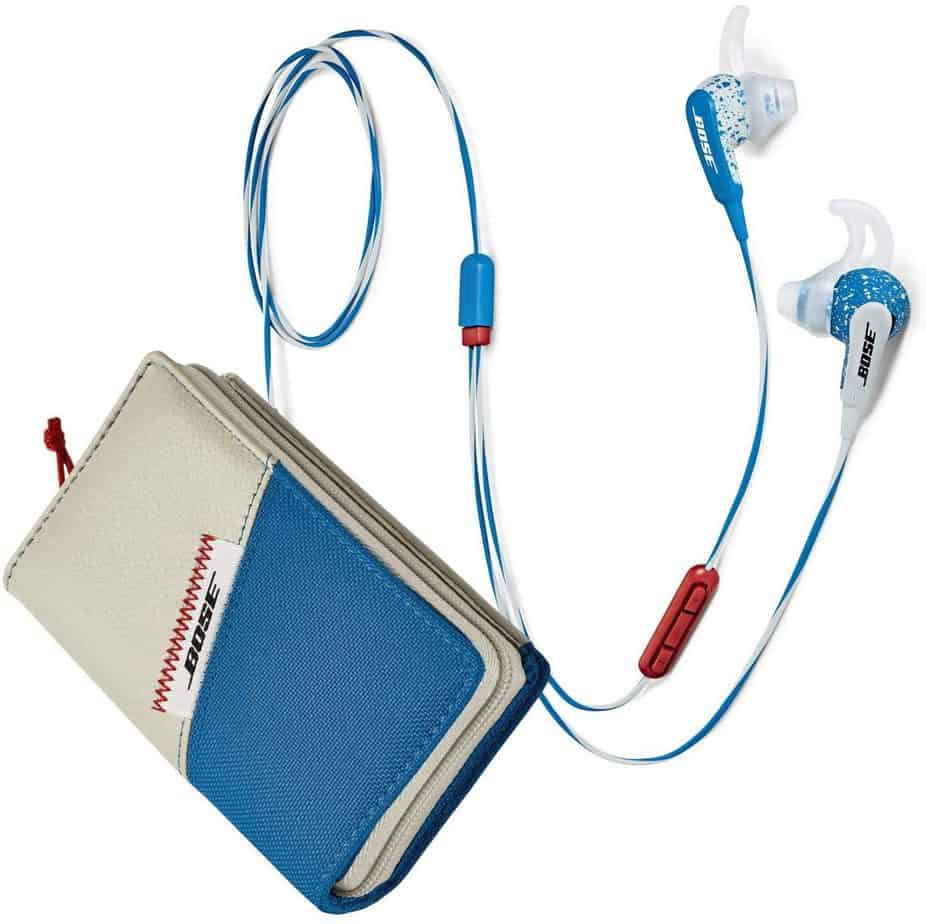 They also seem to stay in place regardless of the intensity of your workout and are a little disarming since they feel like they will fail and tumble from your ears but never seem to.

Unfortunately, the open design of the Freestyle Earbuds tends to be a little too loose and lets a fair amount of background noise in, which rather spoils the music, audiobook, or Richard Feynman lecture you happen to be trying to listen to as you complete your workout.

The earphones also have the tendency to become a little sweaty and uncomfortable for exactly the same reason, though luckily they are both sweat and water-resistant so even if your ear does get a bit sweaty, you’re not going to cause long term damage to the equipment.

In terms of cord length, the Freestyle Earbuds are similar to the SIE2i’s, which translates as ‘shorter’ and best used with an arms case, like the one that comes with the system. There is an extender cord that also comes with the system so that it can reach your shorts pocket, but it seems a little too long and you have a cable hanging around unless you are extraordinarily tall.

The Bose Earbuds are a tad cheaper than the Powerbeats items, coming in at around $180 retail, but that’s probably a relative thing given the problems with noise leakage. Right now you can actually find them for less than $120 at this listing. 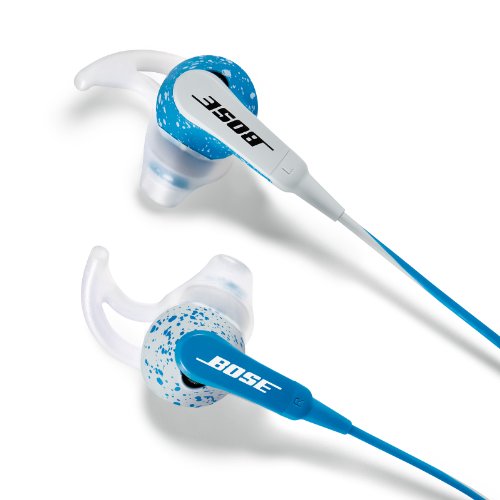 Bose Freestyle Earbuds, Ice Blue
$154.95
Check Price
We earn a commission if you click this link and make a purchase at no additional cost to you.

Looking like traditional ‘cans’ but without the flailing cord, the Monster iSport Freedom headphones boast a full pack of Bluetooth connectivity so that you can run, jump, lift weights, or do just about any high-exertion sport without the problems of the headphones falling off. They are just perfect for listening to your music without the risk of them falling off/out as with earbuds or earphones. 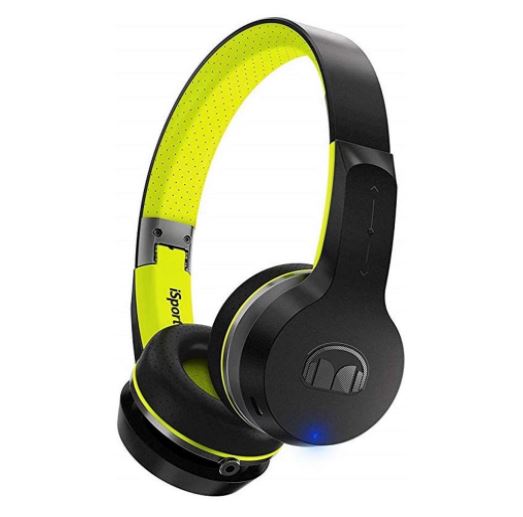 It’s just a pity that the sound quality isn’t a whole lot better to complete the package, but it’s not and that becomes the major let down of the iSport’s, and just isn’t befitting of a speaker system that will dent your pocket to the tune of nearly $350 retail!

Get them out of the box and they just scream ‘sports headphones’ with their Neon green finish that covers most of the outside. They are constructed from lightweight plastic materials but don’t feel tacky or overpriced. The materials give the impression of a lightweight construction that isn’t going to become a problem when you use them as intended.

Being Bluetooth, you charge the earphones and slap your music on visa a micro USB connector, neatly tucked away behind a rubber plate. If you charge up and stick your listening material on before your workout, you’ll have plenty of power to last the longest sessions.

The iSports differ from the Bose and Beats devices by virtue of being total ear coverings, and they are great for the first half hours workout. But add a little sweat and they don’t grip quite as well, becoming a little irritating as you have to slightly reposition them periodically, and certainly not something that you would expect to have to do with cans of this price.

Thankfully, I’ve had some luck at this listing where these headphones are available for about $210. 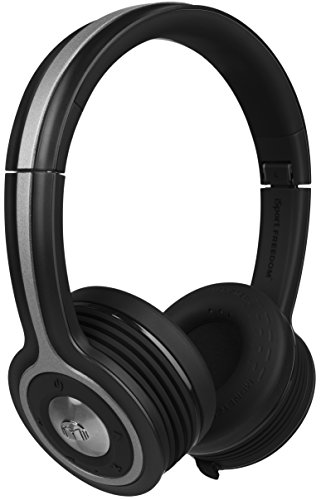 Monster iSport Freedom Bluetooth Headphones
$199.95
Check Price
We earn a commission if you click this link and make a purchase at no additional cost to you.

Pros & Cons of These Headphones – Head to Head

Finding the right set of earphones is a tricky business, especially when it becomes a major investment and you could be spending a couple of hundred dollars, so you want to make it the right choice. The problem is that there isn’t really anything that is absolutely perfect so it becomes an exercise in compromise.

In reality, you have to consider what you are actually going to be doing in your exercise routine; if it’s going to be jiggly then you will want something secure on your head and not prone to becoming dislodged when the sweat builds up.

If you are going to be outside and on the public highways, you might want something that gives you a little warning that a truck is blaring its hon at you so earphones as closely fitting as the Powerbeats2 will give you solid music but zero interruption.

Of the three devices tested, the Powerbeats2 were probably the best overall in terms of fitting, staying in place under duress, sound quality, and quality, but the other two were pretty close all around.