The Full Cerwin Vega SL 12 Review You Have to Read!

Cerwin Vega has been producing high quality speakers for both home and venue for over 65 years. They’re inexpensive consumer line, the SL series, has been a staple for audio enthusiasts on a budget since the inception. The cheap price, understated looks and, of course, beautiful sounding audio are the cause.

This speaker, the SL-12, is the flagship 12-inch version of the line, sporting a three woofer design. You’ll get a 12-inch woofer, 5.25-inch midrange driver, and a 1-inch soft dome tweeter for the money. Read on to see what makes this speaker so special. 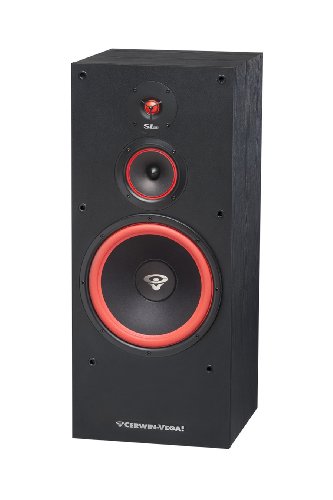 This speaker looks great. Despite sitting well below the height that would be expected, the build and overall look are exceptional. Cerwin Vega created a design that, while not on the level of Klipsch’s reference series, sticks out in a pleasant way.

Starting with the looks, the speaker comes in one way; totally blacked out. The entire cabinet, cones, and even removable grille are totally black. The only color is the bright red accents around each of the drivers.

The woofer and midrange driver both hold a red ring around them, with the cone jumping back to black, while the 1-inch tweeter is completely red. It may not be the look for everyone, but it does look good. This look is a signature of Cerwin Vega, meaning it’s essential if you own any of their other speakers.

Other than that, there are few extra touches to the speaker as well. Cerwin Vega branding on the nipple of the woofer is a nice, but subtle addition. Most logos come off as offensive, but this one works with the overall design. There is also black bracing around the tweeter, something is good for both security and aesthetics.

If you don’t want to mess around with the look, you can always through the removable cloth grille on. It’s actually really nice, with slightly bevel corners at the bottom and a white Cerwin Vega logo. It will completely cover the red if that’s not your speed.

To fit the large woofer, the cabinet is oversized as well. Meant to push out a lot of bass, both the length and width of the cab are larger than a floorstanding speaker, measuring around 14-inches in both ways. This extra large design helps bass resonate so you get the full impact.

While the looks of the SL 12 aren’t up to par with Klipsch (in my humble opinion) they still look pretty great. The logo proves not be immense, and the red pops in a way I really enjoy. Combine that with a solid oversized cabinet, and this speaker does a good job in this category. 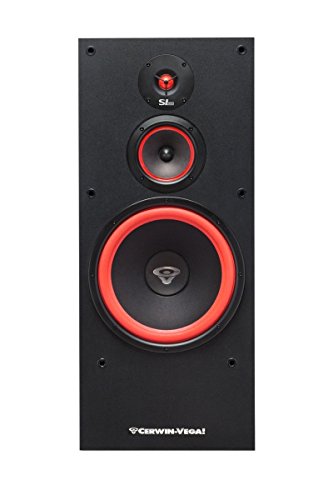 There aren’t many features with the SL 12 that push tech much further. Things like wireless connectivity and remote functionality aren’t really necessary, and would probably disappoint in implemented. The features here are focused on practical acoustics and solid power handling.

The oversized cabinet is the source of acoustical features. Essentially, Cerwin Vega includes a front firing subwoofer with this speaker, meaning the larger size is for both form and function. Form is in order to fit the woofer, function to help bass resonate. Bass seriously punches out of this speaker and the larger design, while it takes up more space, is justified because a dedicated sub isn’t necessary.

Next is the massive power handling. These speakers can take up to 300 watts per channel peak. That means you can seriously drive them to get room shattering noise. Since the headroom is so high, you’ll get a cleaner sound, even at pretty high volumes, with little distortion to interfere.

That’s it, honestly. These speakers don’t mess around, in terms of price or sound. Their completely passive, with nothing else in terms of the design to really set them apart. I want to make a gripe with them, but I can’t. Despite my best efforts, I can’t think of any other features I’d really need to see out of them. 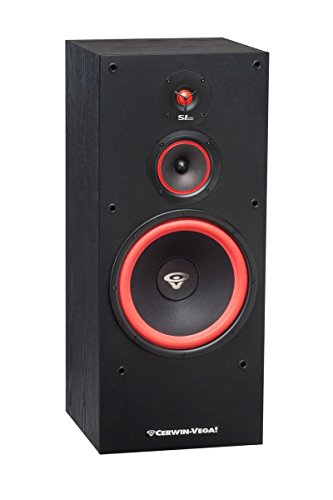 Where these speakers really shine is in their sound. On their own, they’re incredible and within a surround setup, they’re even better. Cerwin Vega has managed to produce a speaker in a range where there isn’t much competition, with no contenders to give the range these speakers do.

The high-end is achieved through the, admittedly stock, 1-inch soft dome tweeter. The highs are slightly recessed which, for me, is a good thing. They don’t sound dull by any means, but the highs don’t stick out. For my taste, I like the highs slightly lower, but you may find a gripe.

The mids don’t tell the same story, though. When I say mids, I really mean upper mids as well, as dialogue cuts through the speakers with ease. The 5.25-inch driver lends some really solid midrange, a frequency range that can easily be messed up.

As opposed to a scooped sound, the midrange is surprisingly natural. It sounds smooth, without peak and valley syndrome of a frequency spectrum that has been carved a little too much.

Of course, the star of the show here is the low-end. The 12-inch woofer reaches down low, easily cranking out sub frequencies. The 29Hz advertised end of the frequency response is accurate, with lows shaking the room like it’s no problem.

I’m happy to say that this doesn’t muddy the rest of the sound either. One benefit of having a sub is the clean low-end that comes out of it. Despite my concerns, these speakers has pristine low-end coming out, not messing up the rest of the frequency response. 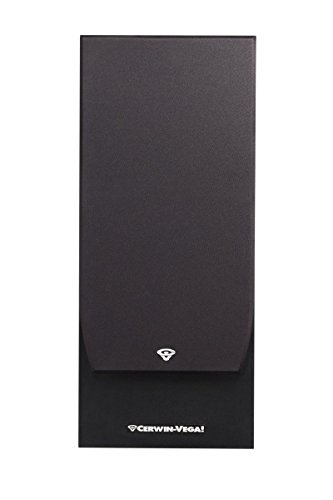 The Cerwin Vega SL 12 is a really special speaker. It manages to hit everywhere I’d expect to, all while keeping the price relatively low. On their own, a set of these would be all you really need to get exceptional audio but go further when integrated with a center channel and some bookshelf speakers.

Beware that adding an additional sub may be a little too much low-end. These speakers produce a lot on their own and take up double duty that the sub would be picking up.

If you like the look, we’re confident you’ll love the sound. Still, it comes down to a matter of personal preference. The best thing to do would be to find a demo set and try them out for yourselves. For me, the sound and look is great.

There isn’t much we can be recommended as a true alternative to these speakers. They kind of sit in a category of their own. Still, these floor standing speakers do a good job at around the same price. 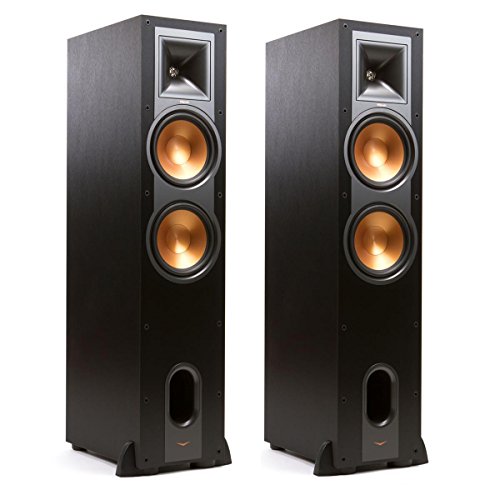 As mentioned multiple times throughout this review, these Klipsch floorstanding speakers may be the closest in terms of sound to the SL 12s.

The key features of a recessed top-end and very natural midrange are present here. However, without a dedicated low-end woofer, the speakers don’t reach as low as the Vegas do, with the cutoff sitting closer to 40Hz than 30Hz. As opposed to a large woofer, Klipsch has front porting which will still give a lot of low-end, but not the amount seen with Cerwin Vega’s offering. 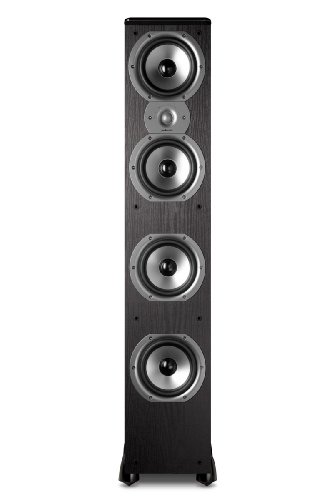 For a little bit cheaper, you can get the Polk TSi500s. These speakers sport four 6.5-inch woofers as opposed to one large one. Still, the result is a large amount of low-end from the speaker. While they can crank it out, it’s not as clean as on the SL 12s, so keep that in mind.

The design, while it’s not breathtaking the Klipsch’s, is fairly nice. An all black or cherry cabinet houses the array of drivers, with subtle gray accents around them. While the look doesn’t floor me, I do like it.

Overall, these speakers provide a different perspective. The midrange is much more scooped, pronouncing the lows and the highs. While it’s not my cup of tea, I can see why people would like it, meaning these speakers may be the right fit for you. 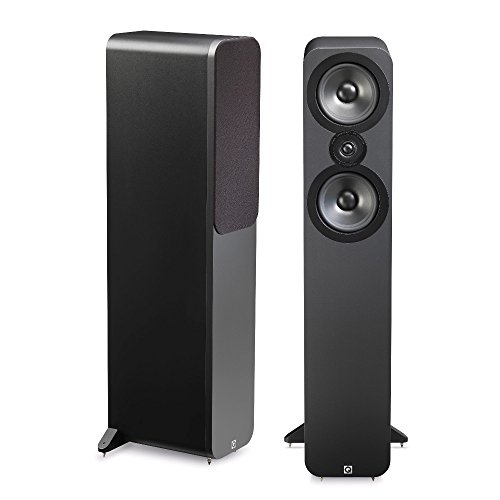 Coming in as the most interesting alternative would be the Q Acoustics 3050s. These speakers sound amazing for what they are, but should be integrated with a sub to really shine. They don’t come close to the low-end response of the SL 12s, a positive trade off so that the low-end can stay clean.

Because of that, they don’t need as much power either. Q Acoustics recommends no more than 100 watts to drive the speakers, contrasted with the impressive 300 watts with the Vega.

Still, they sound and look great. The nestle of drivers at the top keeps the bottom of the speaker clean look. Combine that with the choice of either black, white, walnut, or graphite finish and these speakers look as good as they sound.

Juan is a self-professed sound-nerd and the webmaster / lead author & tester for AllSoundLab. You might literally walk into him on the street because he's tuned out to the world and tuned into his beats...

I bought a pair of SL-12’d about 2.5 years ago. Only gripe, mediocre high’s, and they constantly shut themselves down. Anybody recommend a decent high end tweeter I could swap out these duds with??