In recent years, Sennheiser has moved into the audio space for gamers. The Game One and Game Zero headphones are two of the premiere models, offering flexibility across platforms, an adjustable microphone, and beautiful finish.

They’re so close, in fact, that’s a bit difficult to tell the difference between the two. While the $50 price difference brings some new features, the headphones are mostly the same, built in the same shell, using mostly the same technology. Read on to see if that price jump is worth it to you. 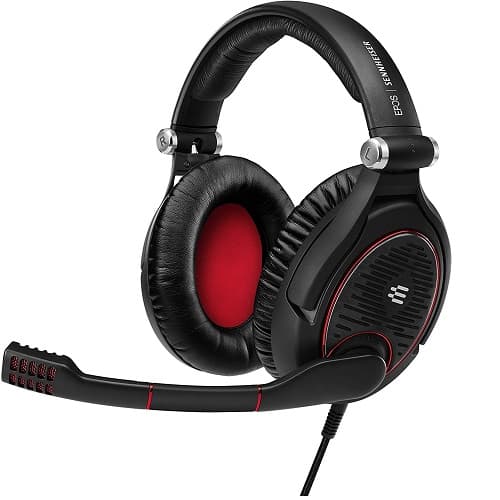 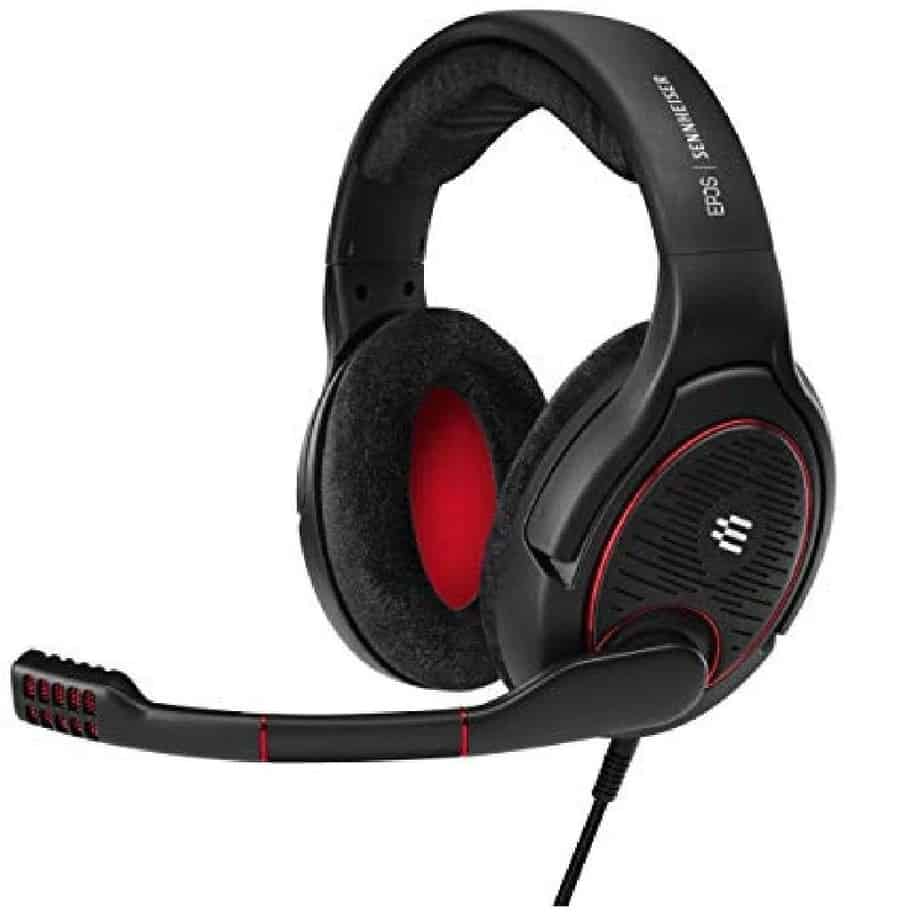 The Game One is, counterintuitively, the more inexpensive of the two pairs. Despite that, it’s still a great pair of headphones, with excellent build quality and great sound to boot.

You can get the Game Ones in two different colors: black and white. There’s a little extra flair from red accents around the ear cups and red cloth covering the speakers, but the color is mostly monochromatic.

For the Game Ones, this works just fine. The headphones look very much in the vein of “gamer”, but not too overtly. They’re stylized, don’t misunderstand, but Sennheiser manages to make this happen without being gaudy.

The build quality looks good but is suboptimal considering the price. Mainly, this critique comes in the frame. It’s made completely out of plastic and feels pretty weak when put under any scrutiny. It’s disappointing, really, considering how expensive these headphones are and how cheap they feel.

Comfort doesn’t tell the same story, thankfully. The ear cups are very comfortable, with extra large plush velvet ear pads. The only downside to these is that they can get a little gummed up if you sweat a lot while gaming. On top, there’s plenty of padding to keep your head nice and comfortable, even during long gaming sessions.

While the build leaves a bit to be desired, the Game Ones are still a pair of headphones that looks good and is comfortable to wear. I would’ve liked to see more considering the price, but, overall, I can’t complain.

These headphones are truly tailored for gaming, with an open-back design, positionable microphone, and on-ear controls. It’s also compatible across platforms so you can use it anywhere.

The open-back design is really nice when gaming. Using closed headphones for long periods of time has unintended consequences, including headaches and, in some cases, nausea. While it seems like not a big deal, having a little ambient noise goes a long way with these cans.

It’s also useful considering there’s no sort of surround-sound in these headphones. Simulated surround is huge for gaming and, while it’s disappointing to not see here, the open-back design provides a more natural sound which leads to a wider soundscape.

The microphone is quite good, providing clear audio when gaming and cutting most background noise. The only issue is that it’s pretty massive. While you can pivot it back, it’s a bit uncomfortable having a massive mic hanging off your head.

It, thankfully, doesn’t get in the way of controls, though. The opposite ear cup has a fairly large dial that allows you to adjust the volume of the headphones without reaching around. It’s fairly large, yes, but it would’ve been nice to see either a dial on the bottom or a larger implementation so it’s easier to access.

Overall, the feature set for the Game Ones is perfect for the purpose they want to serve. The only thing I would have liked to see is some sort of virtual surround sound for a sense of space when gaming. Even so, the open-back design goes a long way in doing something similar.

Sound quality is quite good for these headphones, although I wouldn’t recommend them for solely listening. If your goal is gaming, with some light listening here and there, then these cans may be a fit for you.

You really notice a lack in the midrange. The headphones don’t pump in the way you’d expect when listing to music because this area of the frequency spectrum is lacking. It’s empty, lacking any true impact due to how much is cut out.

This does, however, work very well in games. Sound effects hit much harder, peaking at the top and bottom of the frequency spectrum. There’s a nice sense of space too, feeling gunshots shoot past or tires screech on the ground.

While it’s good, it’s certainly not the best for gaming. Sennheiser sits in between, not fully catering to either gamers or listeners. What’s left is something that does both decently, but neither great.

Its experience in audio products is probably a good explanation. It’s a different and one that, as an audio guy, I prefer, but gamers may not. It’s certainly not the normal frequency response you’d expect out of a pair of gaming headphone and, while it’s not bad, it’s something that should be considered.

The Game Ones are a bit of an awkward pair of headphones. They have plenty of merits, with attention to detail in comfort, decent sound quality and plenty of features. However, they don’t fit the mold of what should be expected from gaming headphones. It’s certainly not bad, just something that should be considered.

The Game Zeros are slightly more expensive, but present mostly the same view as seen with the Game Ones. However, some upgrades in the build quality set these cans just a notch above.

The biggest difference between these two pairs of headphones is how they’re built. While the color choices and general aesthetic carry over from the little brother, the Game Zeros are much more rigid in their build quality.

The ear cups are attached to the headband through a ball joint, with metal bracing for extra support. This design makes the headphones more durable, yes, but it also means it’s much easier to adjust to ear cups to fit your head.

Additionally, the ear cups are actually larger. The Game Ones could clamp down on the edge of your ear depending on how you wear them. Such is not the case here, though. The Game Zeros have larger earcups to accommodate, completely sealing off the sound.

The plush velvet material on the ear pads is gone too. Sennheiser ditched those in favor of a leatherette covering with triple-layer memory foam on the inside. This is not only much more comfortable but means the pads won’t get nasty if you’re prone to sweat.

The extra $50 is well spent considering the build difference between these two headphones. While you’re still getting a mostly plastic covering, the upgrades in durability and comfort sell the Game Zeros for me.

The feature set is mostly the same as well. The headphones still feature an open-back design, with a large (sometimes intrusive) microphone, controls on the side of the ear cups and support for just about any platform.

However, there are some subtle differences. For instance, the ear pads are constructed differently than the Game Ones and create a tighter seal with your ear. Because of that, the open back design functions slightly differently.

The intended wider soundstage is better capitalized on here. Instead of losing sound, the seal traps what you want to hear in and carries some ambient noise in through the intended channel. It works much better for these headphones, and I’m glad the change is here.

The only true change is that these headphones are collapsible. The metal bracing on top of the ear cups allows them to fold down completely whereas the Game Ones could not. Sennheiser includes a pretty nice carrying case, too.

There are only a few differences, yes, but the differences still add up to provide some value. The extra $50 is mostly in the build, but the addition of a collapsible frame and a tighter seal on your ears is quite the improvement.

Unfortunately, there is little to no difference in sound quality. The Game Ones and Game Zeros are likely built using the exact same internals and, if there’s a difference between the two in terms of sound, I certainly can’t tell.

The starkest difference is likely due to the seal the upgraded ear pads create. The experience is more immersive, with sound effects creating a space much larger than the Game Zeros little brother.

The issues with midrange are slightly better, too. You can more fully hear the nuances in the headphones. While it certainly isn’t ideal for listening outside of gaming, it’s a slight improvement over the Game Ones.

The Game Zeros are more or less the same headphones internally. While the slight improvement in sound is worth noting, it’s not much compared to the extra features and better build quality on these cans.

Sennheiser had taken the Game Ones and stripped them down to craft something new. While the sound quality is more or less the same, the better build and more robust feature set is more than enough to justify the price hike.

These two pairs of headphones are comparable across the board, from design to build to sound quality. However, the Game Zeros edge out with a more durable construction and better sealing around the ears.

With that being said, they’re also $50 more, and while the price hike makes sense, it may not be worth it to you. To save a few dollars, the Game Ones are more or less the same pair of headphones so you’re not missing out on much.

Which pair are you going with? Let us know in the comments below and, as always, thanks for reading.