In the world of car audio, speaker quality is of utmost importance because you’ll spend a lot of time in your car by the time you send it to the car graveyard. No matter what music you’re after, a good set of speakers will make your daily commute much more pleasant. Here we provide a review of the best car speakers to be found.

Sensitivity ranges for the Polk db series range from 92 to 93 db, making these speakers great for people who like to feel the bass as well as hear it.  Most speakers have ratings in the range of 88db to 90db.

These numbers don’t seem too much different, but as an example, the speaker with an 88db rating would need 3 times more power to create the same volume as the 93db rated speaker.

Power ratings determine how much the volume can be increased without distorting the audio. The Polk speakers generally handle this well, but the smaller door speakers only handle the lower end of the spectrum well. The continuous handling is currently 55 watts, with a peak of 165 watts. At the higher rating, users can produce high volumes with little distortion.

Sound quality for this series ranks with the best available. Though the door speakers don’t produce much of the lower-end bass as the very best produce, but the sound is better overall and is very well balanced. Because the speakers only have a single tweeter, the midrange sound is produced by the woofer and this helps to produce the balanced sound.

Among the drawbacks to this series is the depth of the speaker housing, which makes them difficult to install.  These speakers are the deepest among the five reviewed, and many vehicles don’t have the clearance within the door panel to handle these. You can find these speakers below retail price right here. 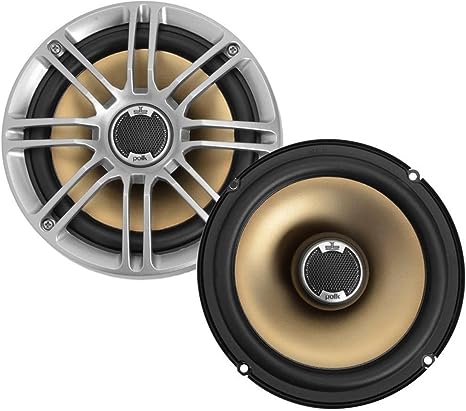 Polk Audio DB651 Marine Certified Car Speakers
$87.64
Check Price
We earn a commission if you click this link and make a purchase at no additional cost to you.

Among the best, and reaching number four on our list today, is the Kenwood KFC series. These speakers definitely deserve to be on any best car speakers list.  The frequency range for this series is between 30 and 22k Hz and the balance is excellent. Both the base and mid-ranges are very full without being distorted and produce very detailed sound throughout the range. 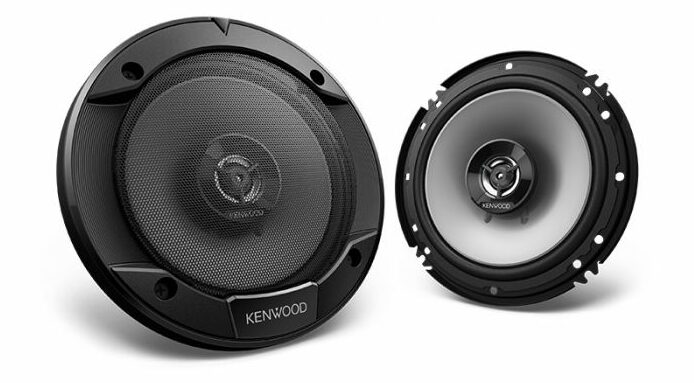 This series has a great selection of designs, being one of the few speaker choices with both four and five-way selections. Most brands feature either two or three-way speakers, meaning they have a single woofer and one or two tweeters.  The Kenwood KFC series improves this greatly with additional tweeters for much improved high range sound.

The treble range in this series did experience some distortions, especially when instruments that create sudden loud sounds like cymbals, or high-range piano runs. The door speakers have a lower audio quality, although they are still much better than most speakers available today.

The high 92db rating allows excellent volume at a lower watt rating, but it can’t handle loud music for a long period of time but, if the speakers are pushed hard, the peak 300 watts does allow the selection to peak without blowing out the device or distorting the sound.

The speakers also have a small 3.00-inch mounting depth which makes them much easier to install in the door. Check out this listing for the best pricing options. 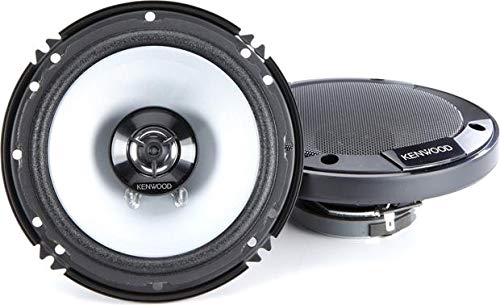 Kenwood KFC-1666S Car Coaxial Speakers
$27.90
Check Price
We earn a commission if you click this link and make a purchase at no additional cost to you.

The Infinity Reference X series has a 92db sensitivity rating. Specifically, this rating indicates the decibels at a distance of 1 meter and with one watt of power. This series has a continuous wattage rating of 100 watts, meaning the 100 watts can be run through the speakers without damaging them.

This is good, but as a comparison, our number two rated speaker, the Pioneer A-Series only requires 50 watts to produce the same volume, so while these speakers are among the best, they require a lot of power throughput per db. 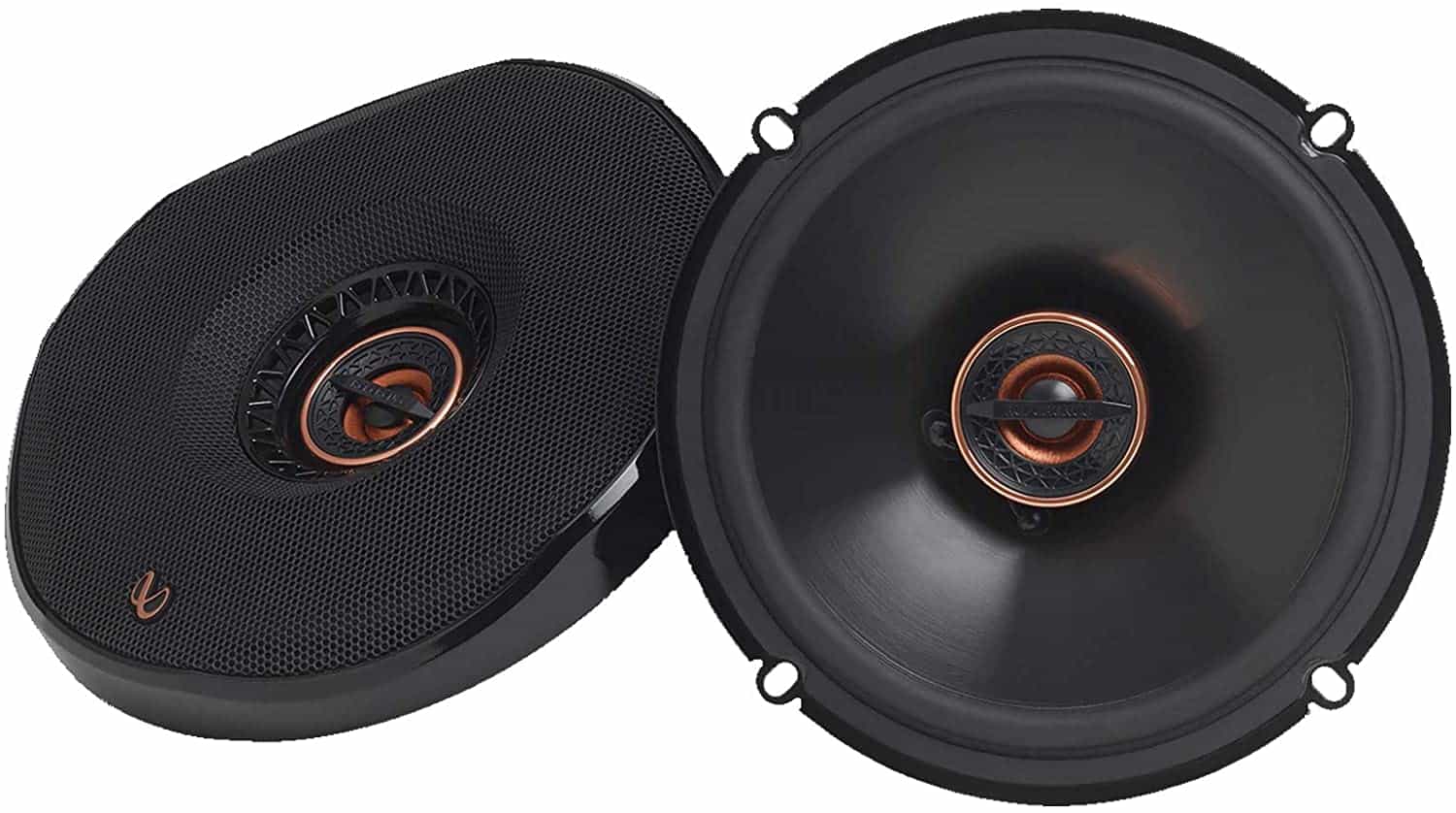 This series is a member of the common 6×9 inch oval group of speakers and they score a 95% audio rating, making them among the very best in class. It won’t be necessary to toy with the equalizer settings much because the music is very balanced, no matter which music genre is your favorite.

Importantly, the lower end frequencies are lacking a bit, only reaching 46 Hz. On the other hand, the bass is very good but not as full as speakers with a deeper response.

The rear deck speakers have a 94db rating, which is the highest for any rear speaker. Average rear-deck speakers have a sensitivity rating of 91db. At 3db more, this means that the Infinity Reference X series will be able to create the same sound volume as the car speaker of average 91db sensitivity with just half the power. You will definitely want to check out this listing for the best prices. 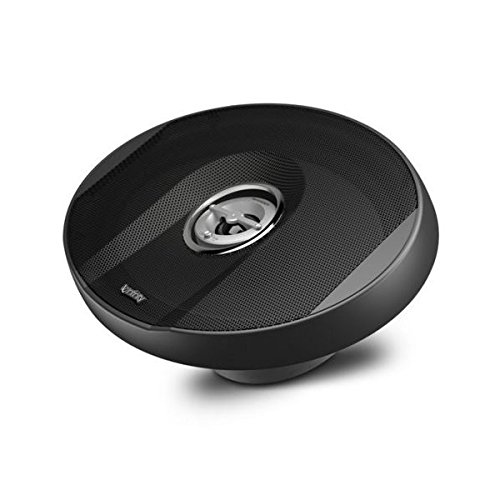 Infinity Reference X REF-9602ix Car Speakers Check Price
We earn a commission if you click this link and make a purchase at no additional cost to you.

The Pioneer 6×9 speakers in the A series are built for sound. The wattage rating is 100 watts, meaning that you can consistently run 100 watts through them without causing damage.

Because the peak rating is 600 watts, the speaker also has the power to take care of the spikes in fluctuating watts throughout a particular song. This also removes the possible clipping and distortion that might occur during fluctuations in wattage during the song. 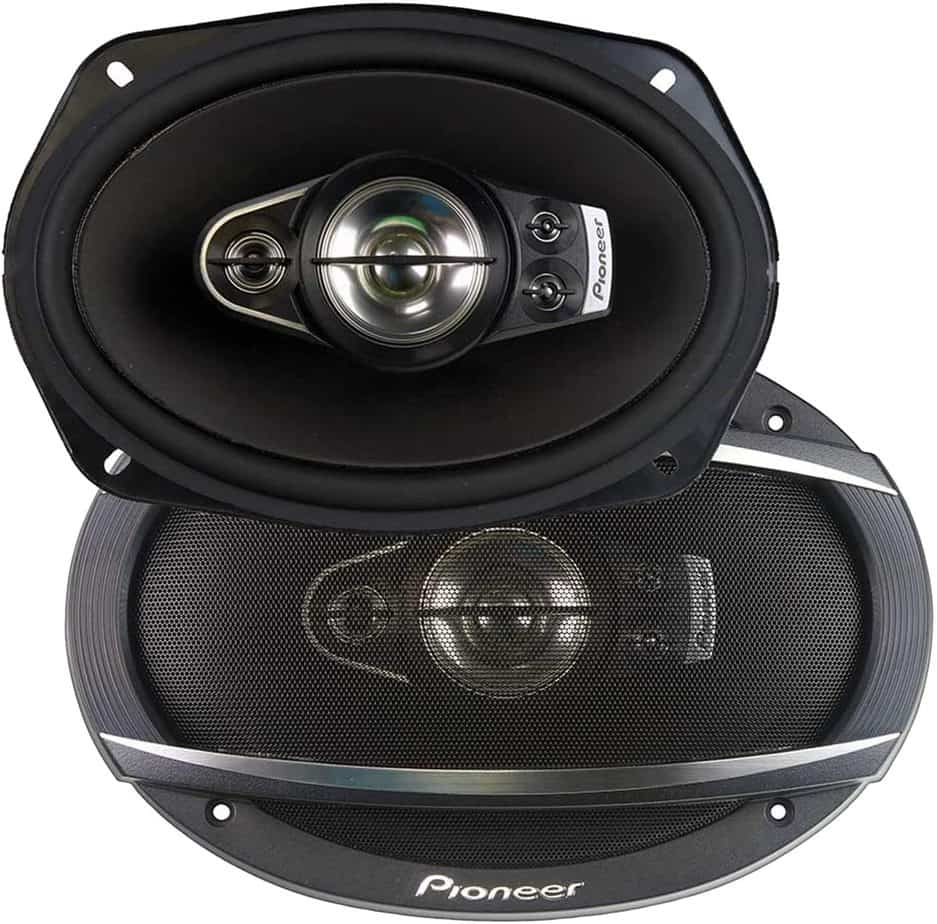 This series, like all of our top 5, have a five-way setup, including four tweeters and a woofer. The best speakers are three-way, so the Pioneer A series is quite a step above even the best speakers out there, and it means that the series actually contains five speakers in one.

The extra tweeters increase the range of available frequencies to 37k Hz, a full 20k Hz above the human audio range.  This would seem counterintuitive, but it provides realism to the range of sound that we hear.

Even though we don’t hear certain frequencies, we feel the vibration that they cause in air molecules. Because the car is an enclosed system, feeling the music is much more important than in other systems and the user can feel the lower frequencies especially well.

The efficiency or sensitivity rating of the 6×9 version of these speakers is a very good 92db, much like the other speakers in the top 5, and as with the others, the A series requires half the wattage to produce the same volume.  This means you can enjoy a higher-volume speaker experience with much less power usage. For pricing, check out this listing. 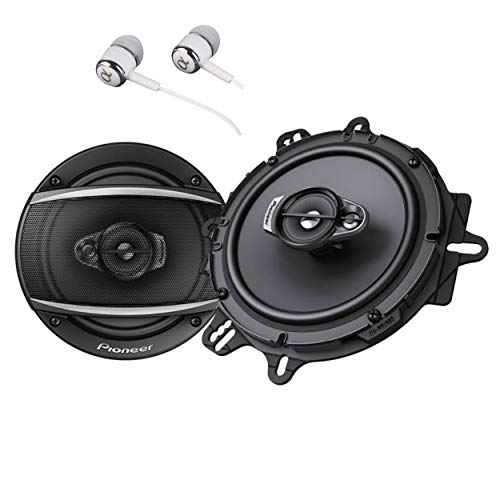 Pioneer TS-A1670F Car Speakers
$59.95
Check Price
We earn a commission if you click this link and make a purchase at no additional cost to you.

The JBL GTO speakers are the best we reviewed. Part of the reason is that the audio is very balanced from the cymbals to the brass and vocals.

The speakers do have a limited frequency range of 21k Hz to 45k Hz, which is lower than many of the others that we’ve tested, but because the frequencies that are not included are out of the human hearing range, most people won’t notice. 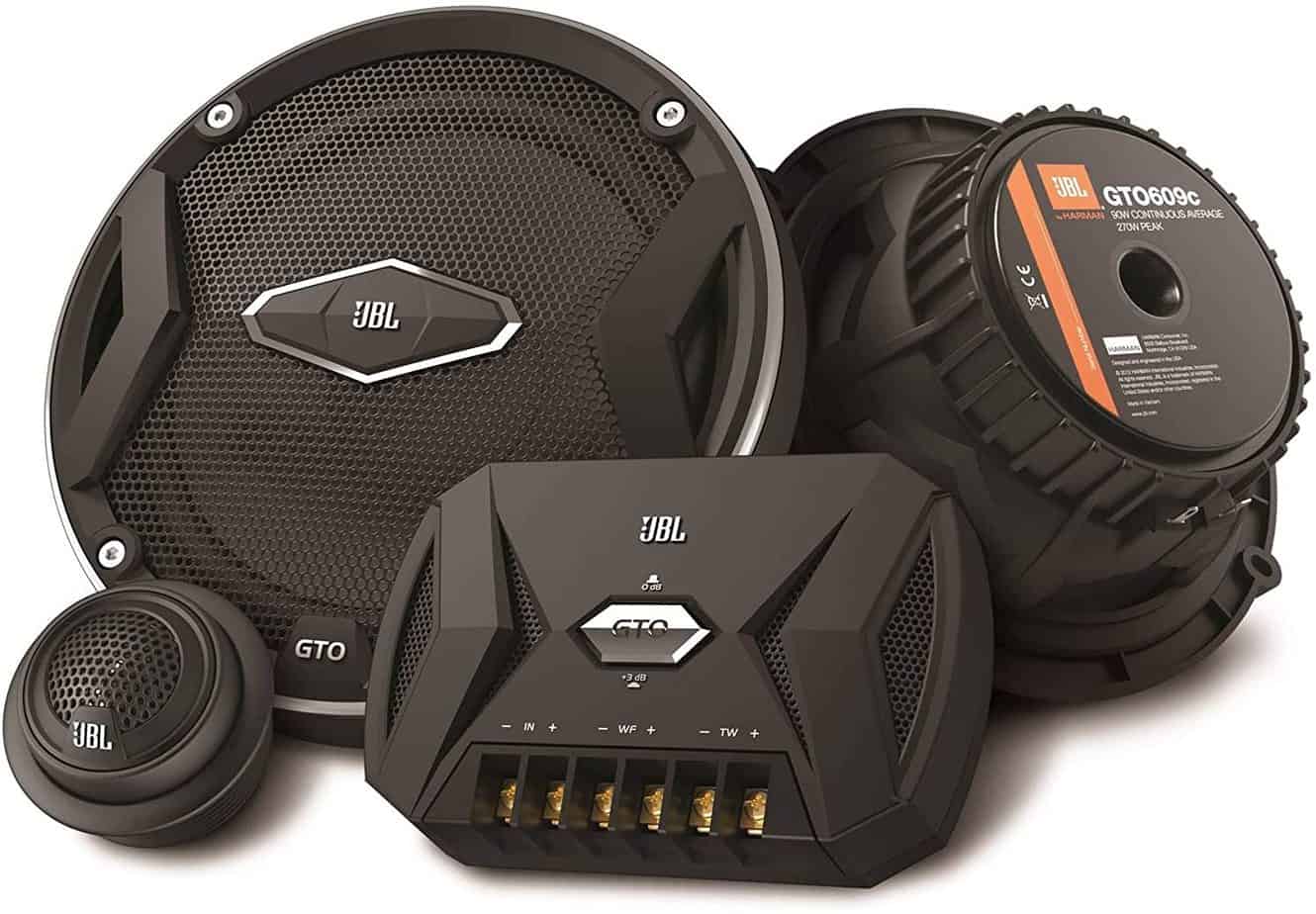 As we’ve noted before, even frequencies that are beyond the range of human hearing can still be felt and add to the overall experience, but that is not considered as important as some of the other great aspects of this set of speakers.

The rating of 94db for this GTO 6×9 is one of its best features because is the highest of all of the speakers reviewed. As has been noted before, this rating measures the response of the speaker to power or wattage input.

Because the rating of this speaker is so high, it can produce the same volume for speakers that are in the 91db rating category, but with half the power requirement of that class of speaker.

For example, to produce a certain volume that required 100 watts of input for the 91db speaker, this speaker would only require 50 watts of power input. I’ve seen these speakers for even less than $99 at this listing.

JBL GTO629 Premium Co-Axial Speaker
$88.99
Check Price
We earn a commission if you click this link and make a purchase at no additional cost to you.

These speakers are the best rated here because they have a continuous power rating of 200 watts. This is the highest of all of the speakers tested and means that the high volumes will be handled efficiently without distortion or damage to the speakers.

All of the speakers listed are very good and are among the top speakers available on the market, and any one of them would be a good choice depending on the user’s preferences and features that he or she seeks.