No matter what kind of car you drive, every automobile has some kind of amplifier associated with its speaker system. With rare exception, these amplifiers are pre-built into an existing head unit and, we’ll be totally honest, they aren’t even worth mentioning.

If you’re looking for one of the best mono channel amplifiers on the market, you can end your search with the Rockford Fosgate R500X1D. It’s just that good.

Utilizing Class-D circuitry and rated at 500 watts RMS at 2hm, it’s got more than enough juice to run a powerful subwoofer. The single power output is best suited for lower frequencies, but with the R500X1D only delivering sound to a single source, you can say hello to beautiful audio.

Heat? We don’t need any stinkin’ heat thanks to the cast aluminum chassis which helps dissipate warm airflow from the internal components of the amplifier itself ensuring system longevity. You won’t get heat but you will get built-in sensors that help track output current and power supply temperature – they’ll make sure the varied subwoofer impedances or even anything as rare as a short circuit won’t cause any damage to your purchase.

The total 500 watts of power can be configured in multiple ways, such as 300 watts at 4 ohms or 500 watts at 2 ohms to help find your best setup. The 45 Hertz bass boost lets you control the bass so you bump your trunk and subwoofer as much as you want to impress people at stoplights. 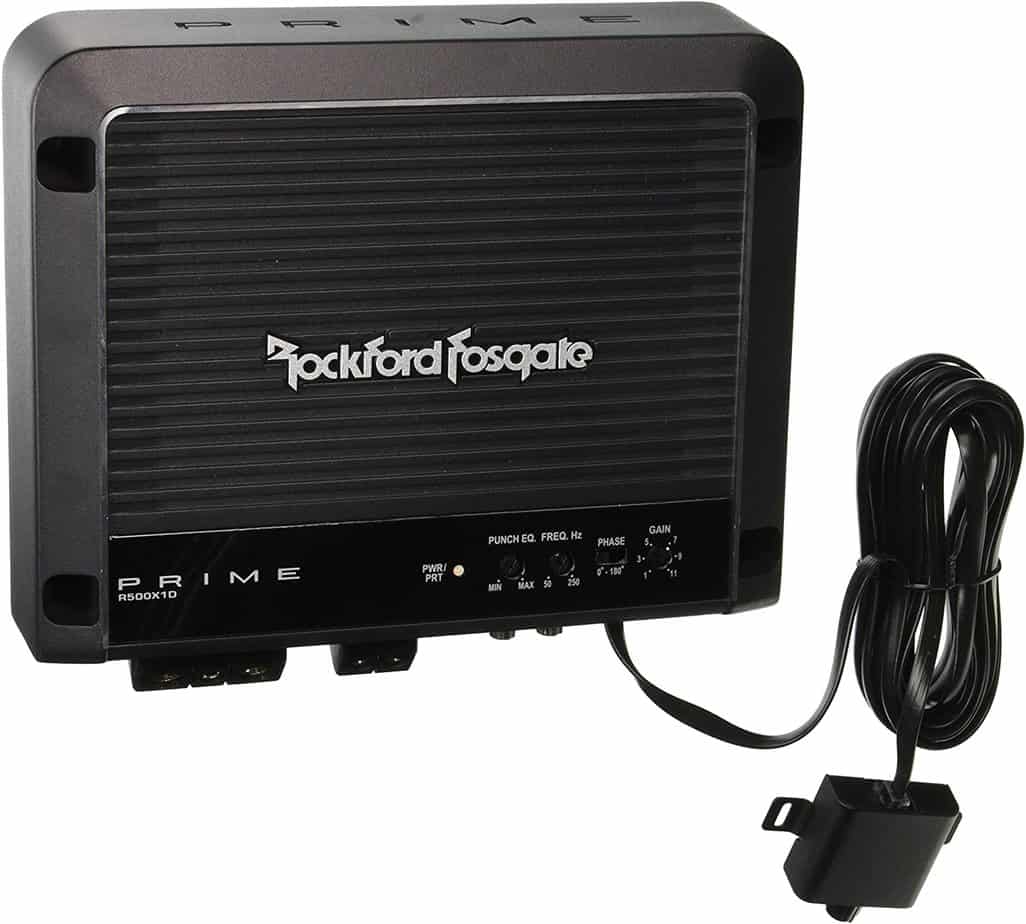 At just 8.5 x 6.8 x 2 inches and 5.3 pounds, the amplifier can be mounted both in the trunk or underneath a seat courtesy of the 17-foot included power wire. The addition of a remote bass control is just icing on the cake with this Amazon bestseller. There’s no question this amp is going to be well suited for multiple use cases and offer you a solid audio experience at a price that won’t break the bank.

Overall, Rockford will deliver enough power to your system without overpowering it. The patented punch bass boost and low pass subsonic filters offer plenty of fine-tuning to find the optimal performance for your ears. The good news is that if you want loud, Rockford brings plenty of volume to the table without affecting the quality of the sound. That calls for a hip, hip, hooray!

Whether your listening preference is jazz, country, or somewhere in between, the Rockford is a great companion to your stereo system that won’t leave you disappointed. That it weighs just over 5 pounds while only requiring one 12v battery to run it has us all kinds of happy. 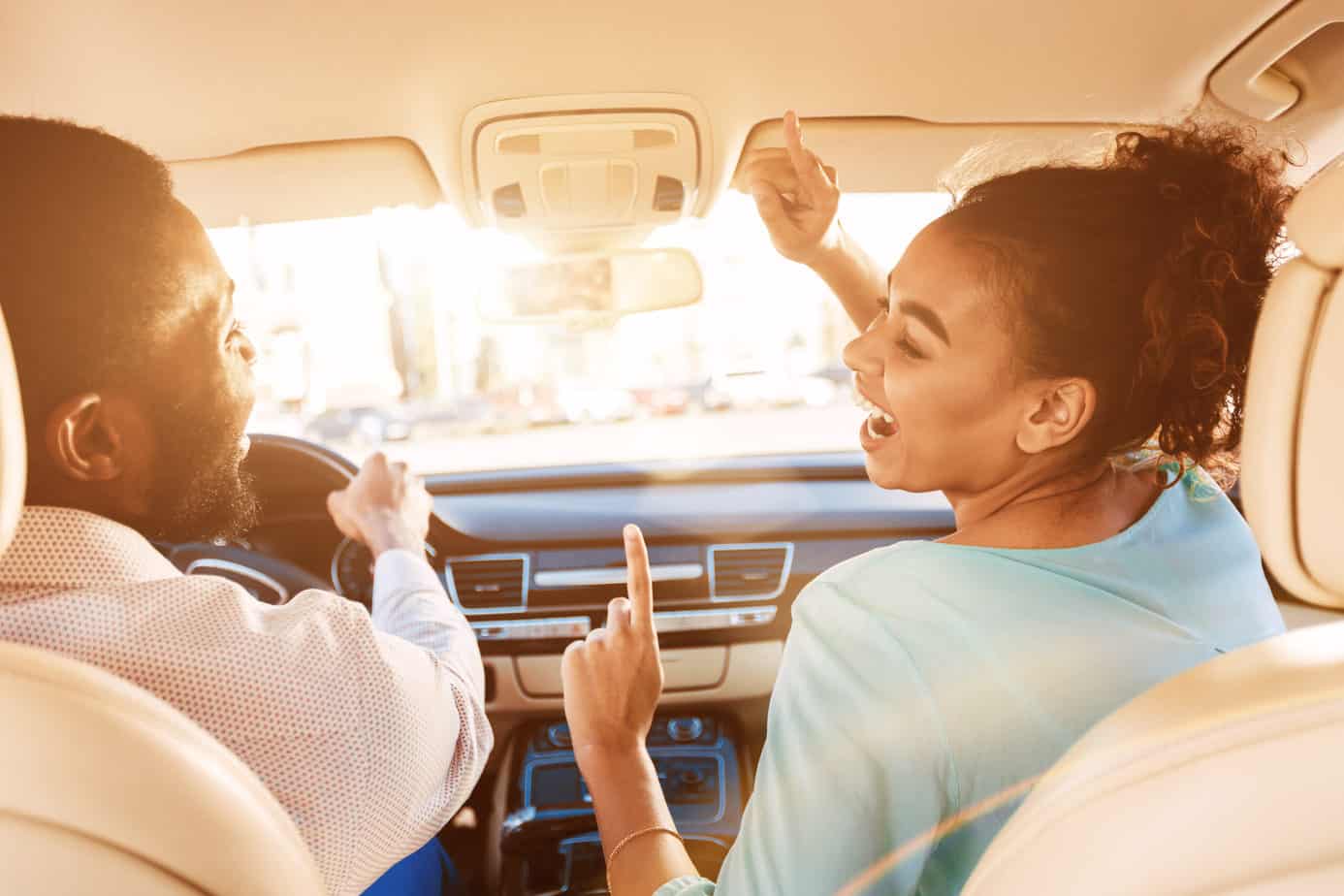 You can push the Rockford to the limits without worrying about shutting down and it’s small enough that you can tuck it away underneath a seat. It might not have hurt Rockford to make the LED lights a little less bright, but that’s neither here nor there and feels like more of a nitpick than anything else. At the end of the day, Rockford offers a great deal of power in a small package that’s good for any sound. What more can you ask for?

Need to power a big amplifier without breaking a sweat? Call on the JL Audio JX1000/1D 1000 watt amplifier and get the job done properly. If there’s one takeaway from reviewing JL Audio products over the years, it’s the deduction that they don’t skimp on quality when it comes to performance. You can always be certain that JL will put the performance of the amp itself above all else.

Overall, the design aesthetic is clean and minimal with the overall build quality offering confidence that the JX1000 is well made. It’s not the lightest amp out there, but since it is most likely going into your trunk, the weight isn’t much of a headache.

The amp itself is rated at 1000 watts RMS at 2 Ohms, though you can get 750 watts RMS at 3 Ohms, or 500 watts RMS at 4 Ohms. There’s plenty of flexibility here which is great but we didn’t necessarily love the unregulated power supply with RWM switching. That’s not to say it doesn’t work. It’s just not the latest in technological achievements though we imagine JL was just looking to get the best performance it could without taxing the components or your wallet.

A variable bass boost is available and you can give it as much as an extra +12dB of added power. Frequency ranges will hover between 50 Hz to 200 Hz eliminating a good measure of unwanted frequencies offering up welcoming bass performance. Additionally, the inclusion of the soft-start turn-on system and added thermal protection include another level of protection and confidence that coincides with the JL Audio name.

Installation itself is easy with nothing seeming out of the ordinary or difficult. If you’ve already had some experience installing an amplifier in a vehicle, the JL Audio installation won’t be any different. Once active, the addition of thermal protection helps the JL stay cool while in use and remain mostly quiet as well.

It is worth pointing out that JL selected a power supply for the JX1000 that isn’t the most efficient on the market, but instead they packed all the components into the aluminum enclosure with large heat syncs. The result is an amplifier that isn’t perfect at managing heat but never gets so hot that you’ll be concerned about overdoing the amp and risking burnout or worse.

When it comes to volume, that’s one area we wish JL had evaluated more before pushing this onto the market. It’s not terrible by any stretch of the imagination. If it were, it wouldn’t be on this list but if it were just a tad bit louder, we wouldn’t complain. Beyond volume, one final takeaway is how well the JL system performs with OEM parts so if you want to just add some bass to your pre-installed factory system (gasp!), the JX1000D is a great place to start.

A variable bass boost is available and you can give it as much as an extra +12dB of added power. Frequency ranges will hover between 50 Hz to 200 Hz eliminating a good measure of unwanted frequencies offering up welcoming bass performance. Additionally, the inclusion of the soft-start turn-on system and added thermal protection include another level of protection and confidence that coincides with the JL Audio name.

So, what’s the verdict? JL has a name that is trusted and well-known in this space and the JX1000D is far from their first dance in the amplifier space. At the end of the day, you’ll find everything you want without feeling like you’re getting too much in terms of unnecessary features.

It’s powerful, but not in a way that has you feeling like the amp will overheat with extended use or that it will damage your car battery. In total, the JL is the sum of its parts and that’s what makes it so good. 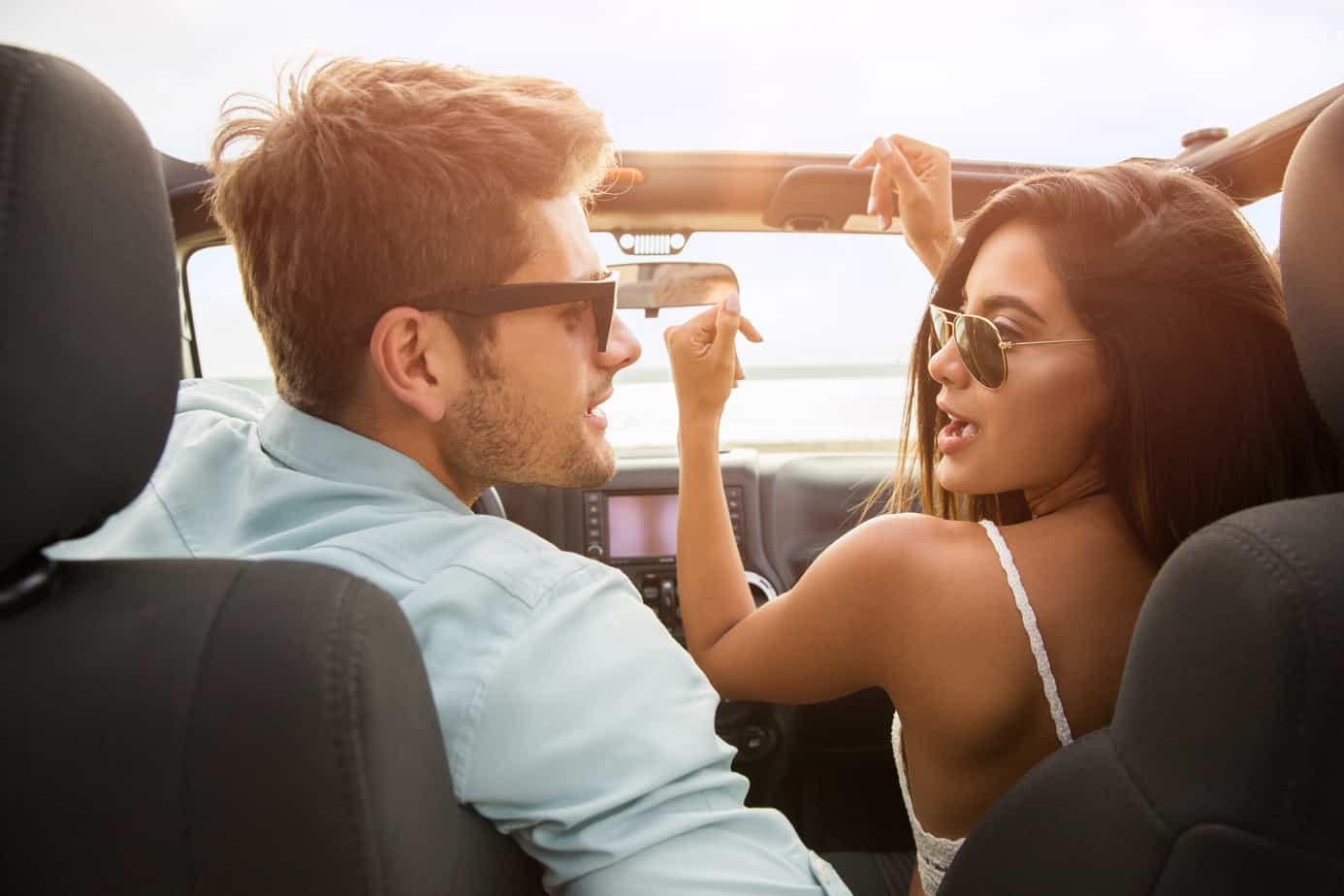 Looking for the perfect amp to run big power to your subwoofer(s)? Look no further than the Alpine MRX-M110 which not only offers a beautiful looking exterior but adds clean and crisp sound making for a great all-in-one amplifier package.

Capable of running 2000 watts max power, you’re going to get 1,100-watt amps RMS at 2 Ohms or 600-watt amps at 4 Ohms RMS. Additionally, you’ve got a built-in crossover, bass EQ controls, and a subsonic filter. At a very high level, Alpine loves to let us know that they’ve incorporated many of their PDX advanced digital technologies into the MRX without driving the price into space.

The inclusion of dual-feedback modulation loops offers clean, distortion-free sound into the low-power MRX and most amps don’t even come close to this combination. A real-time error correction aids in analyzing the signal comparing the input with output and maximizing sound for the best clarity.

The no-shutdown design offers peace of mind for driving for lengthy road trips though we wouldn’t ever recommend pushing an amplifier for hours and hours and hours. When it comes to heat, the MRX utilizes a space power management circuit that evaluates critical component temperatures and will decrease power if it determines any critical circuitry is getting too warm. Ultimately, this means Alpine offers an interruption-free listening experience while you’re banging out to Prince or Garth Brooks or whomever you sing along with while stuck in traffic. 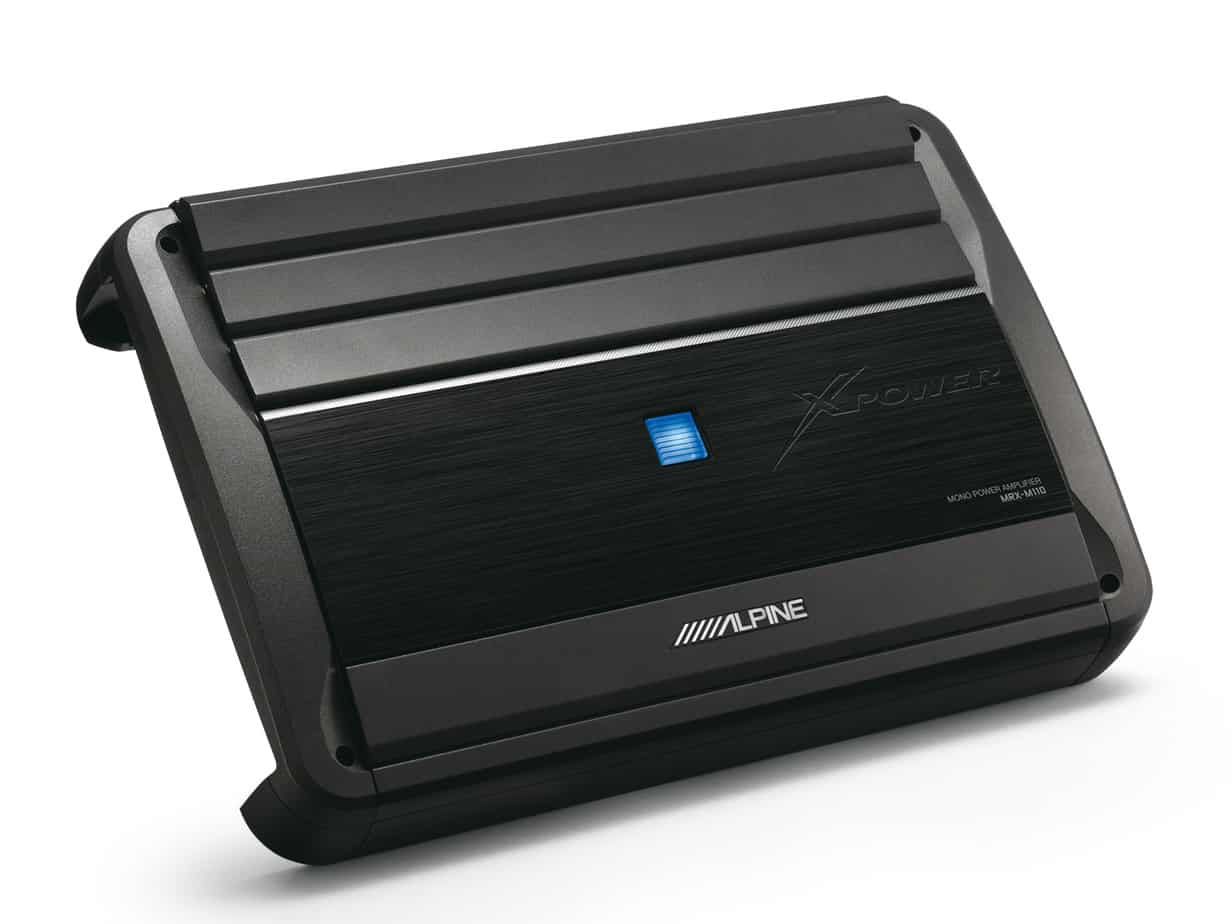 Power and clarity are all hallmarks of the MRX-M110 with standout sound coming from attached subwoofers. There’s no question that if you’re looking for big powerful bass sound combined with a small footprint, the Alpine is just what the stereo doctor ordered. If you want the kind of bass that’s going to rock everyone around you in traffic, the Alpine can pair with subs large and small to make sure everyone knows you’re listening to Prince’s greatest hits.

Ultimately, you’ll find that there’s extremely low noise and distortion all while offering big volume. Beyond distortion, Alpine’s efforts to keep the MRX cool while listening for 5 minutes or 50 minutes show to be extremely effective with the MRX always seeming to run cool to the touch.

Beyond volume, beyond heat control, and beyond price, there’s no question the Alpine offers enough versatility and connects to a variety of speakers with superb performance across the board. Alpine continues to showcase itself as being ahead of the pack when it comes to the total package and that shows through with the MRX-110 performance, whether you’re connected to 12” subs, 15” subs, or something else entirely.

Ultimately, you get what you pay for and while the Alpine offers a big price, you’ll get big performance in return. Does it mean you absolutely need to shell out $300 for best-in-class audio quality? That’s not an easy question, but, realistically, if you’re someone who values audio quality and can’t stand the idea of pre-installed stereo systems, you’ll find the Alpine offers fantastic sound, good technology, and cool temperatures all packaged into a sleek black case. 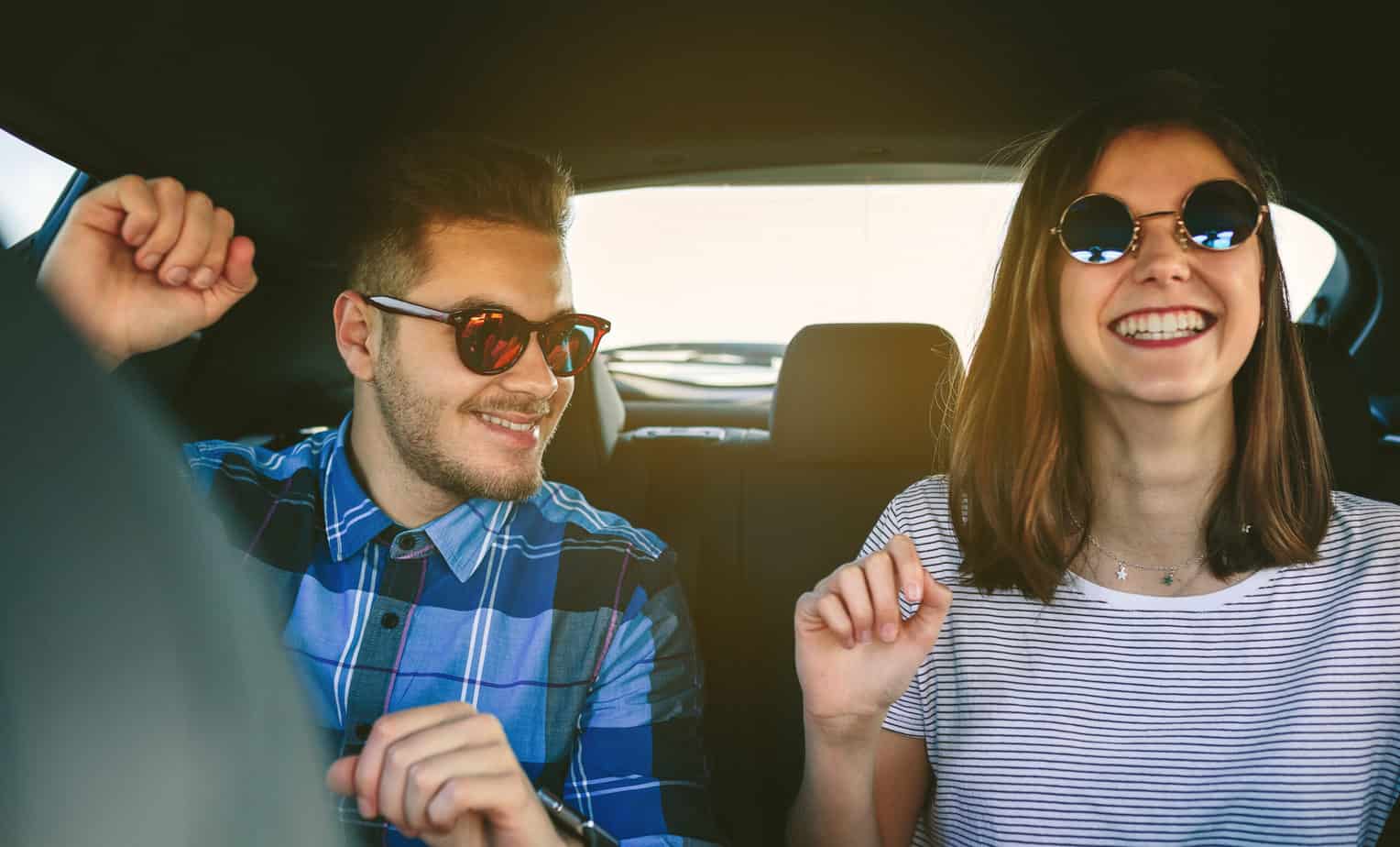 In the end, there’s no single winner here and there’s plenty of competition that we didn’t get a chance to look at. The Kenwood KAC-9106D is another amplifier that gets rave reviews and would likely sit somewhere in the middle of the Alpine and JL options in terms of price, performance, and feature set.

If you’re willing to shell out the dollars, the Alpine is the best bet but the Rockford, at less than half the price of the Alpine, still offers fantastic performance even at budget-friendly pricing. If you thought we could easily declare a single winner, we’re sorry to disappoint.

In the end, you can’t go wrong with any of these three options. If you have a brand you love, then that’s one thing but if you’re willing to experiment, give any of these options a try and thank us with a video of you belting out show tunes.