Low-end requires quite a lot of power in order to function properly. Pushing those long wavelengths takes some juice, so you need a good amp to drive your subwoofers. Some claim a lot of power but sputter out after a few months, and others are just poorly built enough to threaten safety.

We’re here to help ease your process of choosing, giving you a clear outline of which amplifiers are best for your subwoofer. While you’ll still need to learn how to set it up, you won’t after worry about it going out or, worse, exploding.

The Orion XTR3700.1D is a massive 7400W Class D mono amplifier that packs a huge punch for the money. It may not be putting out the full peak rating, but it sure is putting out a lot. This amp can get your sub loud, really loud. 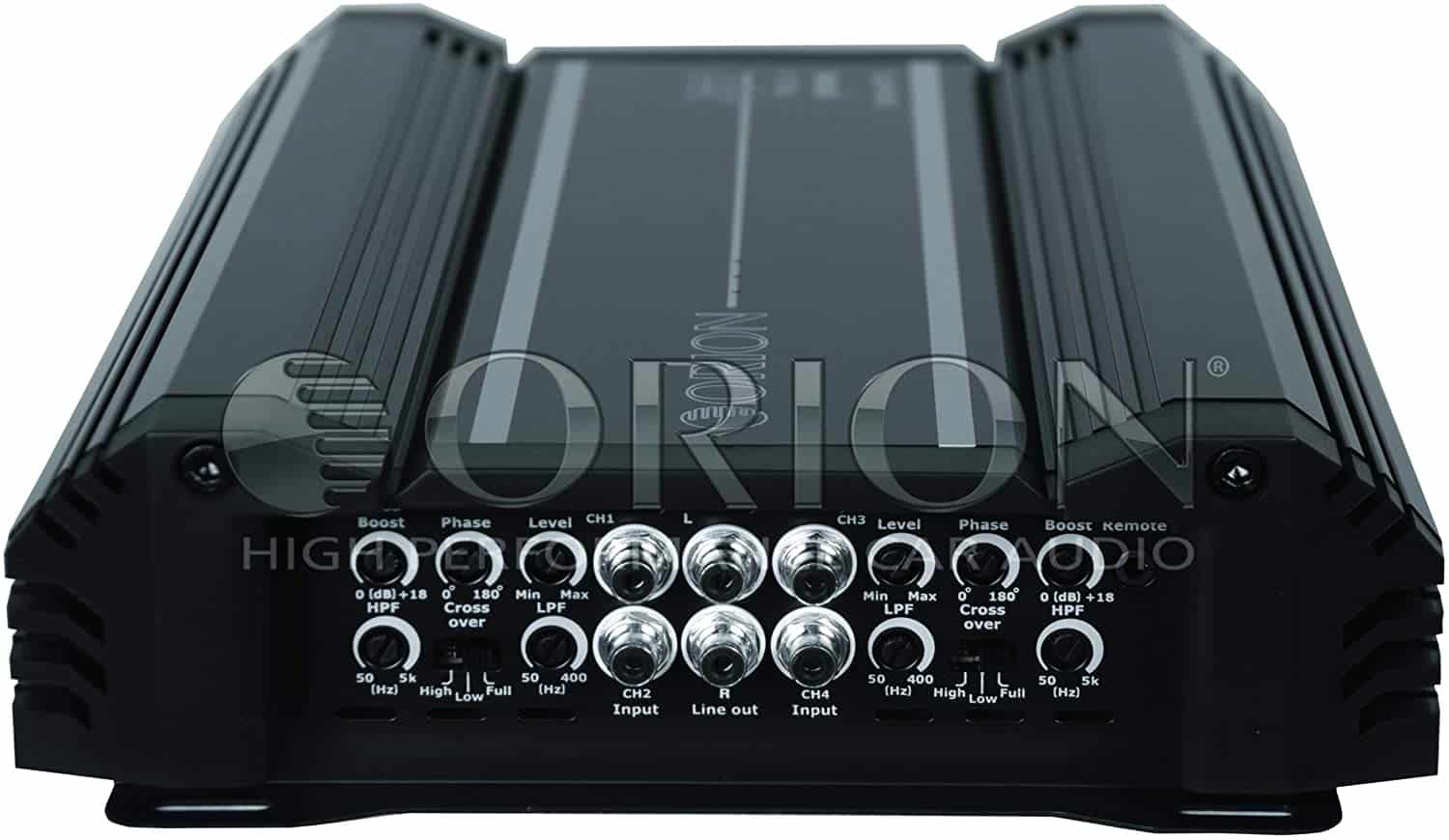 However, that comes with the drawback of power. This amp eats it up, rated at 12.6 volts so you’ll need two batteries to run it. Make sure you have the current stream to handle it because this amp is a power hog.

Once you find the power, you’ll be able to push your speakers to their limits. This amp is a beast and can easily give you the juice to shake the ground. While it’s on the expensive side as far as entry options go, it’s still a great value choice for those who want a high-quality solution without breaking the bank.

Coming in cheaper in terms of both price and power, the HiFonics BRX2000.1D is still a great amp that delivers a considerable amount of power considering how inexpensive it is. This version is rated for 2000W, but there’s a 2400W version for only $20 more. 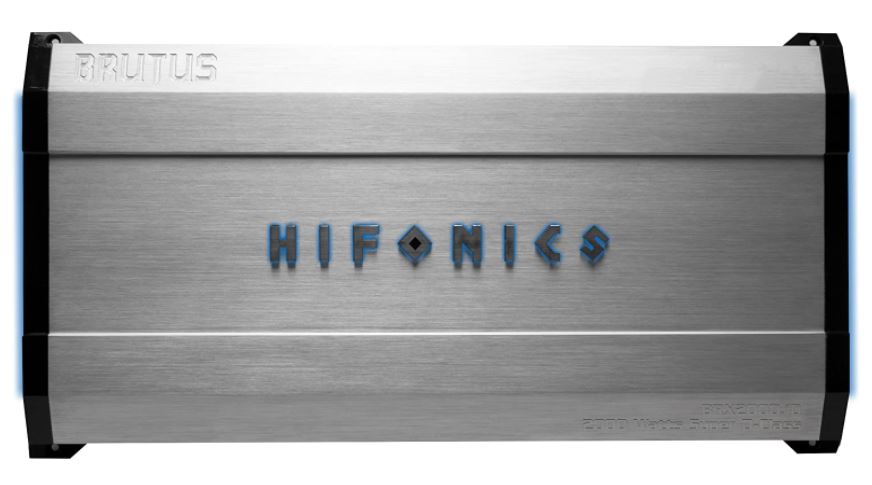 You’ll need to run it at about 13-14 volts in order to do so, though. On your normal car power, you should be able to push 600W, but the real power shines through when you can feed enough juice to this amp.

It gets pretty loud, too. Not as loud as the Orion, but enough to still shake the ground. Illuminated connection terminals add a little bit of vibe to the unit, but it might turn some people off who don’t want LEDs in their backseat.

Going back up in price is the MTX XThunder 1500.1. This amp runs at 1500W RMS at 1 ohm. For those of you paying attention, you’ll notice that’s a lower number than the others on this list. That’s for a reason, too. 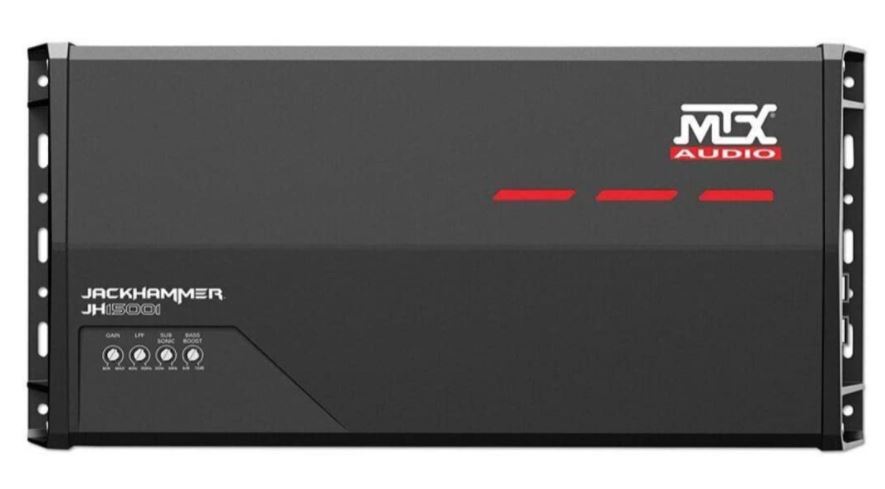 MTX uses the highest quality materials in their amps, and this XThunder one shows how efficient engineering can lead to better power handling. For instance, MTX uses oversized copper traces on the board maximize electrical flow and minimize power loss as it’s flowing to your speakers.

It comes with some extra features as well. There’s a built-in low pass filter, subsonic filter, and bass boost so you can tune the sound to your liking. The side panels are also removable for a sleek look and better access to the connections on the unit.

The extremely inexpensive Rockford Fosgate R500X1D is a simple-to-use an amplifier that’s a great choice for beginners who don’t want to drop too much money. It features a Class D amplification like the other options presented thus far, capable of pushing 500W at 2 ohms. 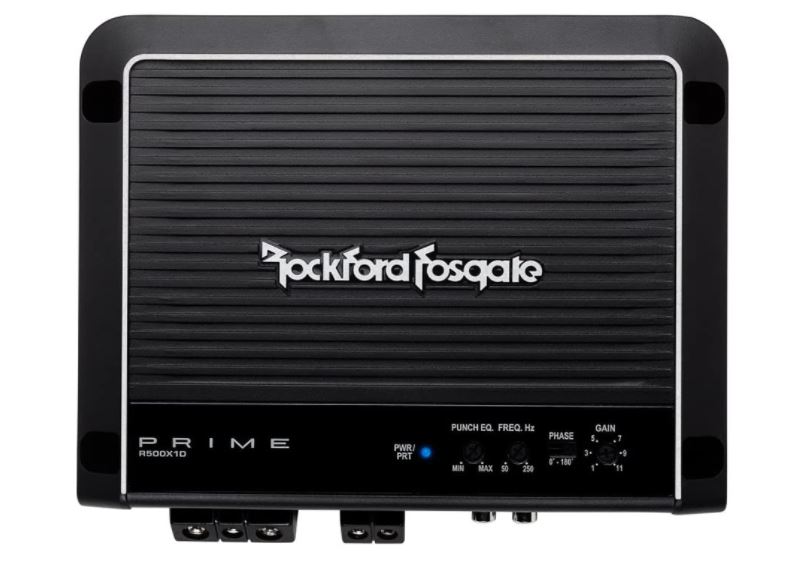 Despite the low cost, there are some neat features on the box itself. It starts with an all-aluminum heatsink that sits over the top to dissipate heat. You’ll also get short circuit protection, over-current protection, RCA pass-thru outputs, and power supply thermal sensing.

Another really nice feature is a phase switch on top of the unit. This allows you to flip the polarity of your sub to ensure it’s firing at the same time as your speakers. This and all other controls are located on top of the amp for easy access, but Fosgate includes a wireless bass remote as well.

Slightly more expensive with a little more power is the Sony XM-GS100. This tiny amp can pack 1100W peak power at 2 ohms with 330W RMS. It’s sleek and small, what should be expected from Sony, which is a marked improvement over the Fosgate option. 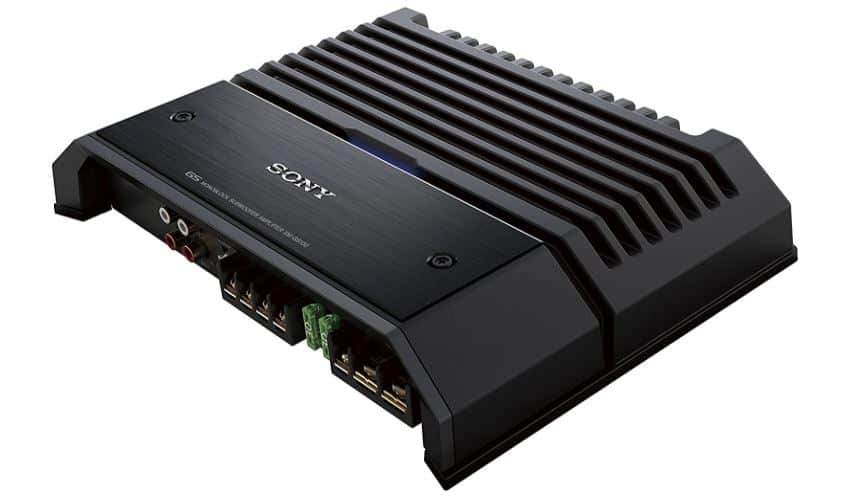 That comes at the cost of usability, though. The controls for the amp are hidden on the bottom side, meaning it’s best to set them once and never mess with them again. Doing so would require you completely detach the unit and adjust. It doesn’t help that the controls require a flathead screwdriver, either.

However, it’s a small gripe with how great this amp is. The Dynamic Distortion Suppressor, or DDS, helps to deliver clear and clean low-end no matter how loud your sub gets. Combine that with thermal control for stable playback and a low-pass filter, and this is a feature rich amp with a good amount of power.

The most inexpensive option on our list, the JBL GX-A3001 has a few problems, but those are easy to overlook considering the price. This 300W amp can deliver its full power on 2 ohms with a single mono channel.

This is a nice entry point due to both the price and ease of set up. The unit doesn’t have too many features so it’s just a matter of hooking everything up and mounting the sub. If you don’t want to fuss with all the extra, and you probably shouldn’t if you’ve never done it before, then this is a nice amp to look at.

A cast aluminum cover helps protect the unit as well as dissipate here, but other than that, you’re not getting much else. This amp is built to simply work, and while it isn’t the most powerful, it’ll get you started on the right path.

Rounding out the list is another budget option that pumps up the power from the previous entry. The Kenwood KAC-M3001 can put out a maximum of 600W on a single channel over a 2-ohm signal. It’s compact and light but still packs a punch, especially considering the price. 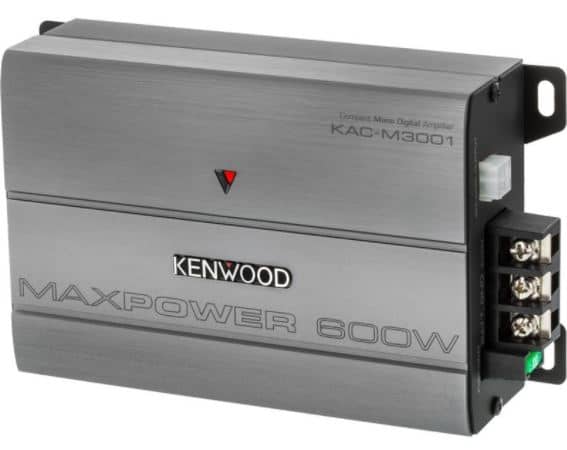 There are applications for this amplifier outside of just car installation, too. The PCB (printed circuit board) is conformally coated. Tech jargon, yes, but it basically means that the internal components are protected against moisture and damp air. For instance, a boat would eat this amp up as it’s small enough to stay out of sight and protects itself against most environmental threats.

There is a sweet spot for this amp, though. It tends to run pretty hot, so some tweaking is required to get it running smoothly. Once you do, though, there’s plenty to like. This is a small amp, protected against

There’s no shortage of options when it comes to amps for your sub. From ultra-expensive to super cheap, we tried to cover the gammat on what you should be looking at. Most require quite a bit of power, so make sure you have that area worked out before trying to implement any of them. Failure to do so will lead to blown fuses and tons of frustration on why your amp can’t come online.

For our money, it’s hard to beat the Orion XTR3700.1D. It costs some bread but gives out a ton of power considering it. If you want enough power to really shake the ground, then this is the place to look.

What amp do you plan on picking up? Let us know in the comments below and, as always, thanks for reading.

Hi! Your article “The Best Amps for Subs [2021]” is very helpful for. After reading your article I got a lot of knowledge from your article. My name is Emma Avery I’m also researching on the Amplifiers. Thank you sharing information.